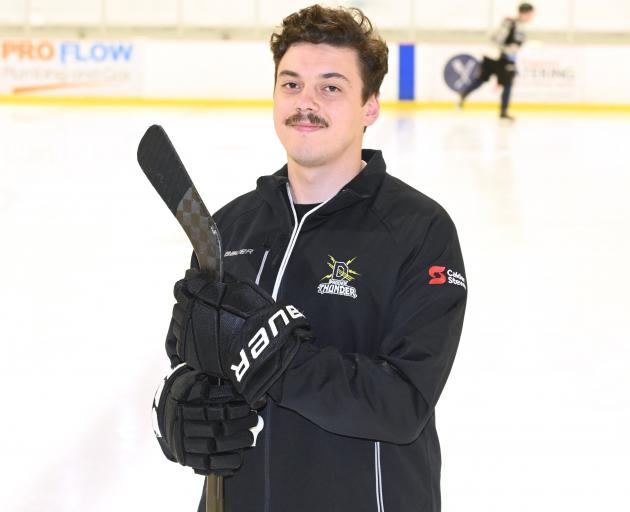 Felipe Aguirre has made the transition from player to coach for the Dunedin Thunder this year. PHOTO: LINDA ROBERTSON
When Felipe Aguirre left the ice last year, it would have seemed unlikely he would return this year as a coach.

The former New Zealand age-group player has been a regular for the Dunedin Thunder since 2016.

A hand injury over the summer looked to derail his 2022 season before it began.

But as one opportunity closed, another opened.

Previous Thunder coach Jeff Avery had hip surgery over the off-season and was unable to be on the ice with the players this season.

So, the team was looking for a new coach.

With Aguirre unable to play, the 24-year-old took the role.

He will be assisted by former Thunder player Guillaume Leclancher, when available, who also has coaching experience.

"It’s real different because I’ve been playing for the team the last six years.

"To step into this new role is a new challenge.

"It’s a nice feeling. It’s real fresh to get a new perspective on hockey."

Aguirre played for the Auckland juniors from 2010 to 2014, joining the West Auckland Admirals in 2014, before moving to the Thunder in 2016.

He was the assistant captain of both the New Zealand under-18 and under-20 teams at the world championships, while having also played in Hungary.

The Thunder has been together since February, although Aguirre did not join as coach until late April.

He said practices had been going well and the senior players were offering strong support.

While his coaching experience was limited — he had done a little bit at lower levels — he was learning quickly.

"It was [intimidating] at first," Aguirre said.

"I’ve been doing a lot of research and stuff like that. A lot of the senior players will help out when we’re out there as well.

"I struggle to explain things 100% all the time.

"I try to get the other players to help out the younger guys.

"But we’re taking a real systematic approach this year, because we have quite a young team.

"Practices have been pretty good lately and the senior guys have really stepped up."

The Thunder has lost key experienced players in Paris Heyd and Joe Orr.

However, it retains a useful core and has plenty of youth coming through.

It will be tested in its first pre-season match this weekend, against the Canterbury Red Devils in Dunedin on Saturday at 3.30pm.

The Thunder begins its season on June 24, against the Stampede in Queenstown.