Brazilian jiu jitsu: No social classes on the mats 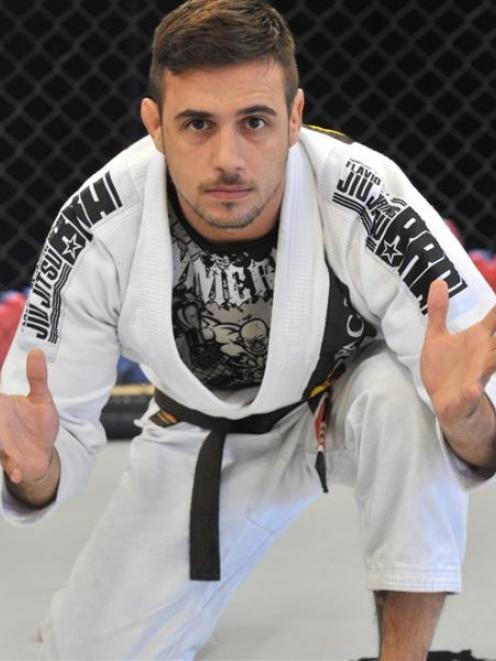 In Brazil, where Christianity and football dominate, Gui has some firm views on his homeland hosting this year's football World Cup and he is not into religion.

Gui (33) is in Dunedin fine-tuning the skills of the Team Hammerhead members.

Gui, a third-degree black belt, said while mixed martial arts (MMA) fighters did not wear the traditional jiu jitsu gi, the moves were easily transferable and were fundamental to a diverse game.

''A gi helps you get more technical on the ground by letting you control your opponent and giving you a sense on how to submit,'' Gui said.

He said BJJ was also a self-defence martial art that anyone of any size could do.

As a 13-year-old growing up in Sao Paulo, Gui was a member of the national swimming team.

He stumbled across Flavio Behring jiu jitsu club by chance while walking home after falling out with a swim coach.

Giu and grand master Flavio Behring's relationship grew to more than just a teacher and student.

''I spent more time with him than my father so he is not only an inspiration as a jiu jitsu master, but also as a person,'' Gui said.

Giu said Behring, who did his apprenticeship under renowned grand master Helio Gracie, was now aged about 73 and was still teaching in Europe and the United States.

He aims to get his fourth next year and his goal is to some day grade his first black belt.

A black belt goes to sixth degree before at seven and eighth they become a red/black belt and at nine are the maximum red, unless they are part of the Gracie family which has a 10th.

''Inside the octagon or on the mats there are no social classes that makes anyone different so it showed me a way I wanted to take my life,'' Gui said.

When he returned to Sao Paulo he worked for the United Nations in a sustainability programme.

This led him to the sports club, Corinthians Paulista, and by 2011 he was part of its newly introduced MMA division.

Corinthians started sponsoring then UFC middleweight champion Anderson Silva in 2011, and in 2012 UFC heavyweight Junior Dos Santos came on board.

Complete with photos to prove it, Gui said grappling with Silva was a ''big honour and a huge mix of emotions.

''I was rolling with my idol, but at the same time had to be professional and not act as a fan.''

He said he finished at the club a few months ago after funding was cut.

Gui is unlike the majority in Brazil and practises no religion, but believes in a ''higher power''.

He is also staunchly against Brazil hosting this year's Fifa World Cup and thinks the money would have been better spent on health and education.

He said the Government was knocking down houses and using scare tactics to stop the poor from speaking up and protesting in the streets.

Gui first came to Dunedin in 2003 and has been back about 13 times since.

He said Team Hammerhead coach Matt Toa, and members Howie Booth and John King, were lifelong friends, while Dunedin was a complete contrast to Sao Paulo because of its ''peaceful nature'' compared to Sao Paulo's dangerous streets.

''Living in a dangerous country means people learn not to trust anyone, and that is not a good thing, but they have no choice,'' Gui said.

He said he would love to live in Dunedin, but had to convince his wife, who was a lawyer in Sao Paulo and had also witnessed its dangers first-hand after being kidnapped in 2002-03 and made to hand over her money from a cash machine.

''She has been here twice and loves it, but finds it a little cold,'' Gui said.

''That's the inside fight I will have to win.''