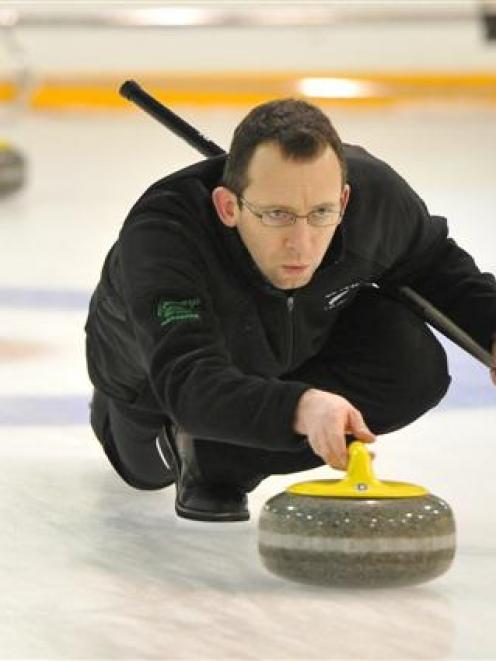 New Zealand representative Peter de Boer in action at the New Zealand championships at the Dunedin Ice Stadium. Photo by Craig Baxter.
New Zealand skip Peter de Boer has set himself one goal this year - to qualify for the Winter Olympics in Russia.

New Zealand is one of the eight teams that will compete in the Olympic qualifying event in Fussen, Germany, in December. The other teams are the United States, Czech Republic, France, Japan, Germany, Finland and Korea.

Two teams will qualify for the Olympics.

''We know it is up to us. If we don't play well enough we won't qualify but if we play at our best I think we will win,'' de Boer said.

It was the lack of preparation that counted against New Zealand at Naseby last year.

''We were playing against very good teams and lost three games on the last stone. They could have easily gone the other way.

''We weren't playing at our best but we were competing. If we lifted our game by 5% we'd win some of those games.''

New Zealand did not prepare properly for the Asia-Pacific championships last year. It learned hard lessons from that.

In the Olympic qualifying events, New Zealand will be playing against teams that have had three months constant preparation.

''We have to prepare as much as we can, particularly in the last month,'' de Boer said.

''It is about having time on the ice and doing that consistently.''

At the moment the team meets together on the ice every three weeks for two days, but that is not good enough going into a major international event.

''We will have five or six weeks when we will be constantly playing,'' de Boer said.

''That will get us to the level of consistency we need.

''The key for us is to have time together over a sustained period.''

New Zealand did not have regular international competition before Naseby last year but has a full international programme this year.-

''We had the opportunity to go overseas last year but chose not to,'' de Boer said.

''This year we have gone all out. We might not get the chance again.

''It has been a challenge because we all have jobs and had to ask our bosses to be flexible with us.''

De Boer (41), manager of a Wellington recruitment business, was a key member of the New Zealand team that finished fifth at the 2012 world championships.

''We exceeded our own expectations that week,'' he said.

''It was a fantastic experience.''

De Boer was close to Olympic selection when he finished runner-up at the Scottish championships in 2004 and 2005.

''We thought we might not get the chance to curl again when we left Scotland in 2005,'' de Boer said.

''To get another crack at the Olympics is amazing.''

De Boer spent two years in Australia in 2005-2007 before shifting to Wellington with his family five years ago.

''A job came up in Wellington so we took that,'' he said.

De Boer was introduced to the game by his father at the age of 10 and has played the sport for 31 years.