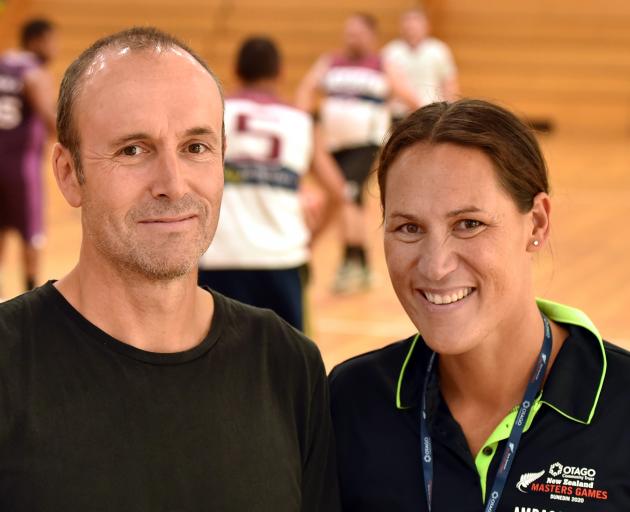 Markham and Jodi Brown at the Edgar Centre yesterday. Photo: Peter McIntosh
Former athletes Jodi and Markham Brown may have retired from competitive sport, but the Masters Games are a reminder of why the Otago pair began.

‘‘The Masters Games represents all the things I love about playing sport,’’ Jodi said.

‘‘I started playing because I wanted to hang out with my friends and sports gave me the opportunity to do that more.

‘‘The games brings friends together to have fun, hang out and play.’’

The former Silver Fern (38) admits that when she was first asked to be an ambassador three years ago, she thought she was ‘‘a bit young’’.

‘‘But its a really cool role. I get to be involved with sports that I never knew a lot about and meet great people.’’

Markham, like his wife, enjoys the camaraderie and fun that comes from the games, playing in the last three with his basketball team The Vipers.

The 48 year old former Otago Nuggets player, said having a training goal to work towards, such as the games, helped encourage people to keep fit.

‘‘It’s a great thing to be part of. I’m looking forward to getting back on the court.’’