Hamish Bond: One peak reached but more to come 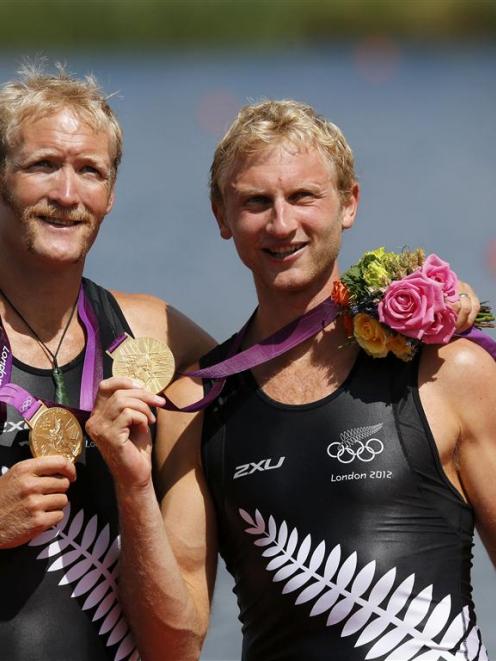 Eric Murray (left) and Hamish Bond of New Zealand celebrate during the medals ceremony after winning gold. REUTERS/Darren Whiteside
Four world titles and now Olympic gold for Hamish Bond. So, where does the Otago rower go from here? Alistair McMurran looks at the options.

Hamish Bond reached one peak in his rowing career at the London Olympics.

But he has some unfinished business and has yet to reach his Everest.

When Bond, with partner Eric Murray, won the pair gold medal and also beat the world's best time, he became one of Otago's sporting greats.

Bond and Murray have both won four world titles and an Olympic gold medal, and can be recognised as New Zealand's best international rowers along with Dick Joyce, Simon Dickie, Caroline and Georgina Evers-Swindell, Mahe Drysdale and Rob Waddell.

But Bond (26) does not yet stand alongside Colin Meads, Peter Snell, John Walker and Jack Lovelock as one of New Zealand's sporting greats.

Bond's gold medal in London should be the beginning and not the end of his Olympic medal haul.

He can be at the top for another 10 years.

New Zealand won its first rowing gold medal in the coxed four in Mexico City in 1968, and the most famous win was in the men's eight in Munich in 1972.

That highlights the significance of the three gold medals in London.

When the crews trained together for the Olympics at a particular venue, they also had a job to earn money.

Rowers helped raise funds to get to international events by selling raffles around pubs.

That financial burden is gone.

An elite rower like Bond now gets a High Performance Sport New Zealand performance grant of around $60,000 a year.

He has been able to train fulltime, making life much easier.

Bond deserves to be given the chance to relax and celebrate his Olympic success for a couple of months before he maps out his future.

If Murray is keen to continue, they should stay together in the pair and continue their domination of world rowing.

If Murray pulls the plug, Bond will need to look at all his options.

He excels at the sweep oar event but could also make his mark in the single sculls, if that was his choice.

Or he could choose a promising younger rower to join him in the pair.

Bond was in the four at the Beijing Olympics and he is unlikely to choose to go back into that boat at the moment.

He is certain to continue in the sport.

As Olympic champion, doors will open for him.