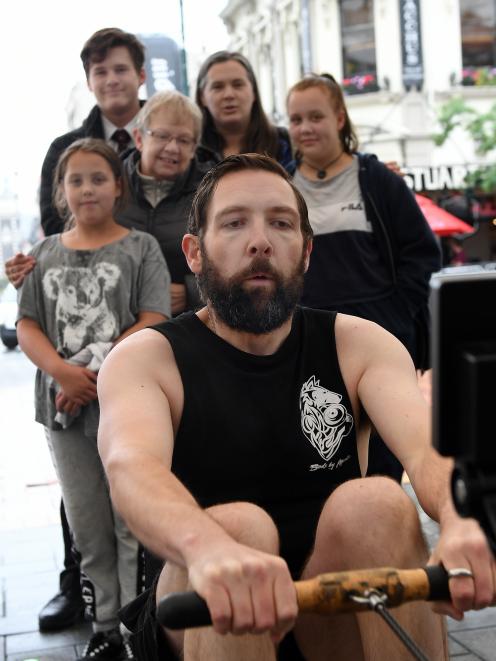 David Parker is all concentration on the rowing machine in the Octagon yesterday watched by his family (from left) daughter Molly (9), stepson Conner (15), mother Rae, fiancee Kathryn and daughter Casey (14). Photo: Stephen Jaquiery
David Parker lined up in the indoor triathlon at the Masters games yesterday. He was not set on breaking any records. Getting first was not on his agenda.

But for Parker (36) it was about competing and getting in the race.

The Dunedin man has had to face plenty of obstacles in making it to the starting line at the games.

Parker was born in Roxburgh but moved to Dunedin when he was young. He was born with multiple epiphyseal dysplasia.

This impacts the growing ends of bones and is relatively rare, affecting one in 10,000 births.

When he became an adult, it started impacting on his hips and he had his left hip replaced but is yet to have his right hip done.

With an inability to move quickly he started putting on weight and was also becoming sick with multiple sclerosis (MS).

The bad news continued when he was diagnosed as being pre-diabetic and was told he had to make some serious lifestyle changes. Life was not easy — he had to get his children to tie his shoelaces, as it was too difficult for him to do it.

Faced with little option, he took the bull by the horns and got into some serious life changes. His diet had a radical overhaul and the fitness gear came out of the storage cupboard.

‘‘I ended up losing 40kg in four years. I could have just sat back and taken the simple road and got diabetes. But by losing all that weight, it really saved my life,’’ he said.

‘‘The MS is not good for overweight people and I went on a pretty strict diet.

‘‘I stopped eating sugar and started slowly changing my diet. Then I started working out in the gym.’’

He was trained by Aaron McMurdo and the kilograms started coming off — he has now gone from 110kg to 70kg.

Watched by his fiancee and family yesterday, Parker was elated to finish the 30-minute indoor triathlon — which actually occurred outdoors in the Octagon.

Competitors had 10 minutes each to use rowing machines, exercycles and treadmills.

He completed it well and will now line up for the 1000m row at the indoor rowing on Friday.