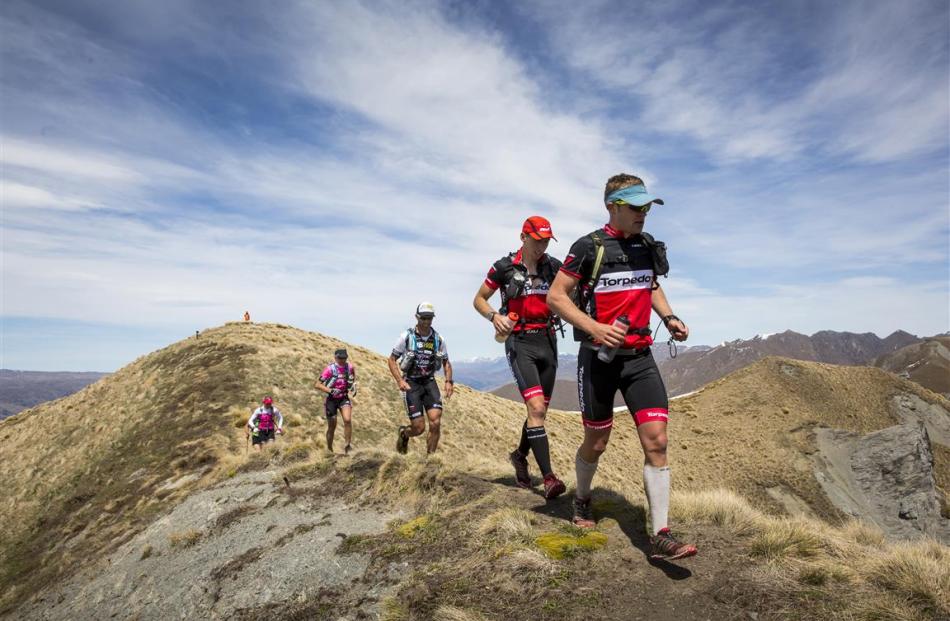 Leading a pack of athletes on the final stage of Red Bull Defiance in 2014 is Queenstown-based Hamish Fleming, followed by Wanaka’s Pete Smallfield, Richard and wife Elina Ussher, of Nelson, with Simone Maier (Wanaka) and an obscured Marcel Hagener ... 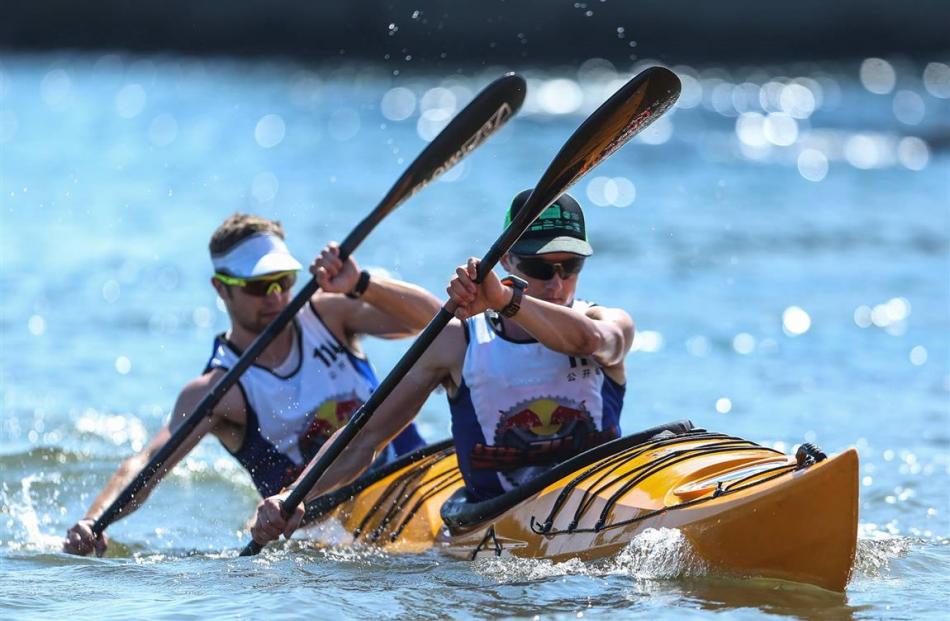 Sam Manson, of Auckland, (front) and team-mate Fleming adventure-racing together in China. They will join forces for Red Bull Defiance this weekend in Wanaka. 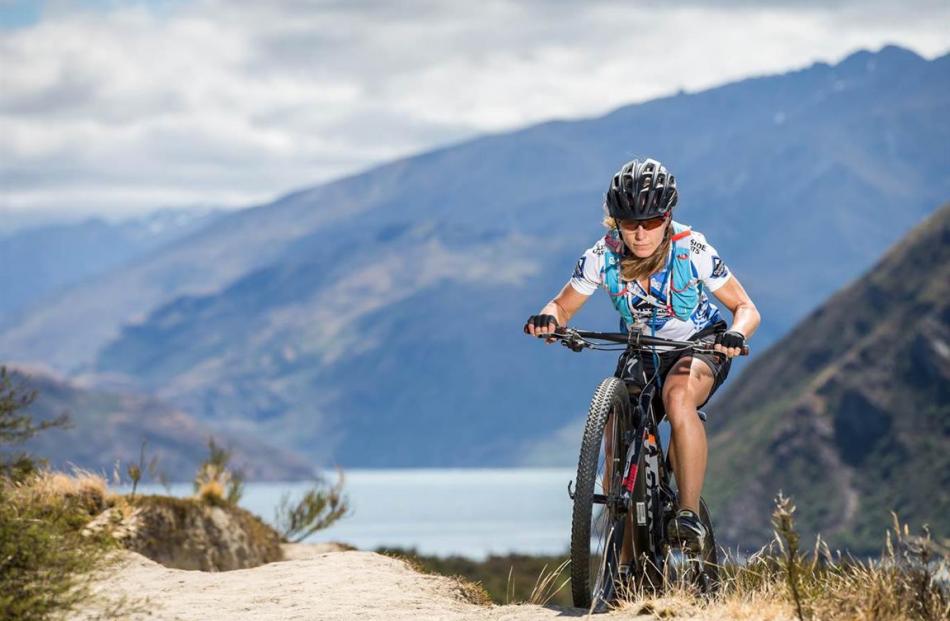 Wanaka is blessed with some seriously stunning and steep terrain, so it is little wonder the two-day sufferfest Defiance is back for a second instalment this weekend.

Come tomorrow morning, before most of you even rub the sleep from your eyes, 50 two-person teams from around the globe will be on a barge bound for west Wanaka's Minaret Station, about to embark on day one of the mountain biking, running and kayaking multisport event.

It is open to sports and elite athletes, who are split into three categories - open male, open female and mixed.

The hardy hundred will also tackle a 60m abseil and partake in a clay bird shoot as they traverse their way through six of Wanaka's high country stations, climbing a total of 5238 vertical metres by the finish line of the 142km race.

Among the international and national elite teams are two Southern Lakes athletes, Wanaka's Joanna Williams and Queenstown's Hamish Fleming, who are among the favourites to win their respective categories.

Fleming (25) is racing with Aucklander Sam Manson (24) and these two young guns were not disappointed to see that course designer and 2014 Defiance winner Braden Currie would not be defending the title he won with fellow Wanaka athlete Dougal Allan.

Currie is focusing instead on his bid to make the New Zealand triathlon team for the Rio Olympics.

Fleming and Mason adventure-raced together with phenomenal success in China last year in a four-person team with Wanaka's Simone Maier and her Ohakune-based partner Marcel Hagener.

The foursome won the Wulong Mountain Quest and the Zunyi Adventure Quest and also picked up two seconds and a third in other gruelling but lucrative Chinese races.

While Maier and Hagener will have high hopes of repeating their 2014 mixed team victory, Fleming and Manson have the men's title in their sights.

"We are hoping to win, I guess, but I don't want to jinx it. There are a lot of strong teams competing, so it could go any way,'' Fleming said.

He finished the inaugural edition in third place, racing with Wanaka's Pete Smallfield.

"It was awesome, a really good event. That's the style of racing that I really love. It's what we do in China, so to have that in New Zealand is pretty cool,'' Fleming said.

In the youngsters' favour is their race history together, their strong running backgrounds - which will help on the steep 9km Rocky Mountain and demanding 27km Skyline stages - plus their fitness levels.

Fleming is employed by Queenstown cycle tours company Around the Basin, and fits training around his work, while Manson, an air force technician, is training for his fourth attempt at the Coast to Coast race.

He placed fourth in 2014 and fifth last year in the Coast to Coast and achieved a third at the 3D Rotorua Multisport festival in 2014.

Manson expects to arrive "in prime condition ready to fight off the best'', he said.

"Hamish and I are around the same age and get along well as mates,'' Manson said.

"We know how to work together and exactly what is required of each other while racing in this type of event. We also run about the same gears in most stages so our pace is matched by whoever decides to dig harder into the grit at the time.''

Williams (41) got a late call-up in early January to enter Defiance after her friend, Floortje Grimmett, decided not to race.

Not many women would be able to fill Grimmett's shoes at such short notice, but Williams is a seasoned campaigner of five multi-day Godzone Adventure Races and keeps herself as fit as a professional athlete, while still working as a physiotherapist in Wanaka.

The decision to join her Christchurch-based mate Sia Svendsen was easy after she experienced Fomo (fear of missing out) two years ago, when she volunteered as the tail-end Charlie on Defiance's two run stages.

"It was such a good course. I was keen to do it,'' Williams said.

She and Svendsen raced in the Coast to Coast last year, winning not only the women's tandem race but the entire tandem category.

"We have had a lot of fun racing together before. I'm looking forward to having a couple of days out in the New Zealand countryside.''

Defiance
At a glance

BEST PLACES TO WATCH THE ACTION

Saturday: West Wanaka bridge. There are two transition areas here. First is the mountain bike to run transition, followed by the run to kayak transition. The transition areas are in close walking distance to each other. Best viewing times will be between 10.50am and 1.50pm.

Sunday: Lake Wanaka waterfront opposite the skate park. Watch the athletes depart in their kayaks at 6.30am, then come back any time from 1.30pm onwards to see the first athletes finishing.