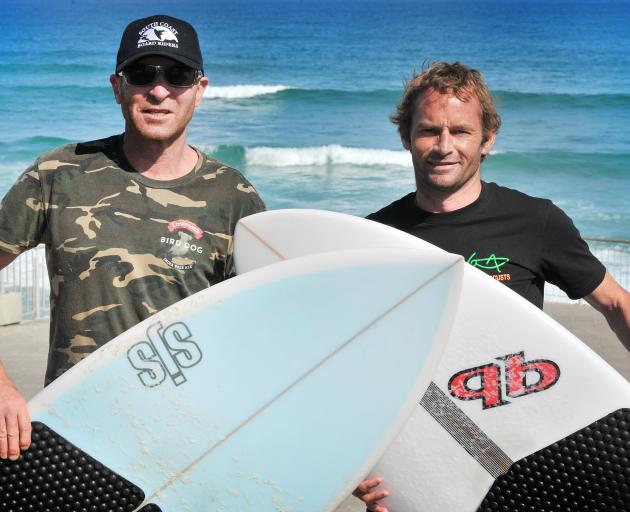 Greg Bell (left) and Malcolm Diack at St Clair beach. The two have been organising the World Kneeboard Championships to be held in Dunedin from February 29 to March 7.PHOTO: CHRISTINE O'CONNOR
Greg Bell has kneeboarded all around the world.

Now he is excited for kneeboard exponents worldwide to come to Dunedin.

A form of surfing, kneeboarding uses slightly shorter and wider boards and riders get on to their knees rather than feet.

Surfers will come from countries such as Tahiti, Spain, Japan, South Africa, Australia and the United States to compete at the event.

It will be held at St Clair Beach, beginning on February 29 and running until March 7.

Surfing New Zealand had bid for the event and decided to bring it south. It has previously been held in Taranaki in 2009.

Bell, who got third in the 1989 world championships in Tokyo, was unsure if he would be able to compete this time.

He was due a hip replacement and was unsure if that would clash with the event.

However, he hoped the beach would provide quality waves for the 75-80 competitors entered.

"Kneeboarders like nice high waves, quite heavy, real fast and hollow waves, sort of like tubes and stuff like that, because they can get up quicker and they’re smaller," he said.

"So hopefully we’ll find them some good waves here.

"All the world champs I’ve been to I tell the people we get such good waves in Dunedin.

"Every time I come back from overseas I get better waves here than we have overseas.

"It’s just the water temperature — they’re going to have to handle that."

The discipline had been popular with the older generation and it was primarily there that the bulk of the competitors remained.

However, Bell said it was beginning to be picked up by youngsters again in South Africa.