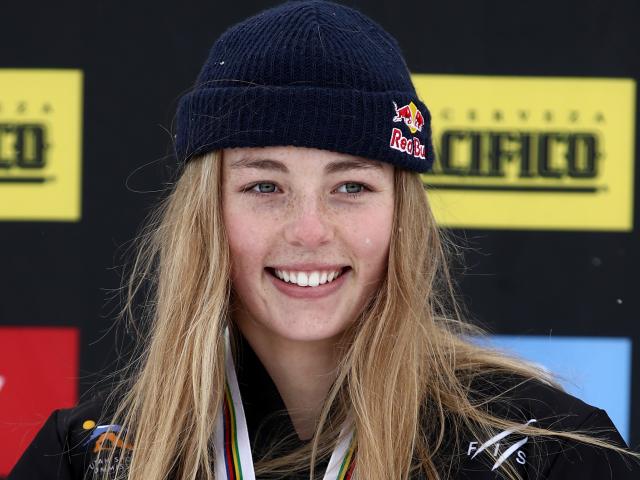 But put the Wanaka teenager in heels and a gown and suddenly her balance is not so assured.

The 18-year-old was nominated for an Espy award following a stellar season. The queen of the slopes claimed the World Championship crown, gold and silver medals at the X Games and a United States open snowboarding championship title.

She has mastered the snow, but the red carpet got her heart pumping almost as much.

She attended the awards ceremony in Los Angeles on July 10 and ''it was crazy''.

''The Espys were amazing. It was pretty much like the best athletes in the world there,'' she said.

''Everyone was super dressed up. It was a really good night.''

''The amount of times I've worn heels in my life I can count on two hands. Snowboarding is a lot easier than wearing heels.''

Sadowski-Synnott is one of four ambassadors for the New Zealand Winter Games, which get under way in Central Otago next week.

It is an opportunity for her to compete at home in front of family and friends.

''I'm really excited actually. I'm competing in the Big Air World Cup and I get to compete at home.

''It is pretty refreshing being able to ride in conditions where you learned to snowboard.

''It is a great vibe because everyone comes up to watch. It is going to be amazing.

''I feel like there is a lot more interest in snowsport after the last couple of years.''

Sadowski-Synnott and the likes of Nico Porteous have played a crucial role in winning new fans over. The pair collected a bronze medal each at the 2018 Pyeongchang Winter Olympics, and introduced people to a new lexicon.

Suddenly people were talking about things like a stalefish grab or a grabswitch-frontside 180 spin - which are after all probably no more complex than the breakdown laws.

And there is nothing like success to unearth supporters.

''I don't know what word I would use to describe it [the success I've had this year]. It has been pretty mind-blowing and surprising that it has gone the way that it has.

''I never expected to achieve the results that I have this season. But it was all thanks to working hard and the support crew that surround me.

''That just makes everything a lot easy.''

Sadowski-Synnott made a quiet entry into the Winter Olympics, but her achievements since have screamed out for attention. That success has meant making some adjustments to her approach.

''Before the Olympics, and before this past season, I would be going in as an underdog or a dark horse who no-one knows anything about. But now everyone is kind of watching me and it is just part of the mental game I need to train for, I guess.

So far she has proven adept at absorbing the pressure and finding a way to shine. Her real test will come when her form dips and the tone of the commentary changes. But for now, it is not something she has to worry about.

Sadowski-Synnott is on top of the sport. She finished school at the end of last year and does not have to juggle her commitments any more.

Her love for snowboarding has grown, despite it now being a fulltime job. She has just got back from Australia, where she has been shooting a new photo catalogue for her sponsor.

A great Kiwi and a credit to the country!
And so young.