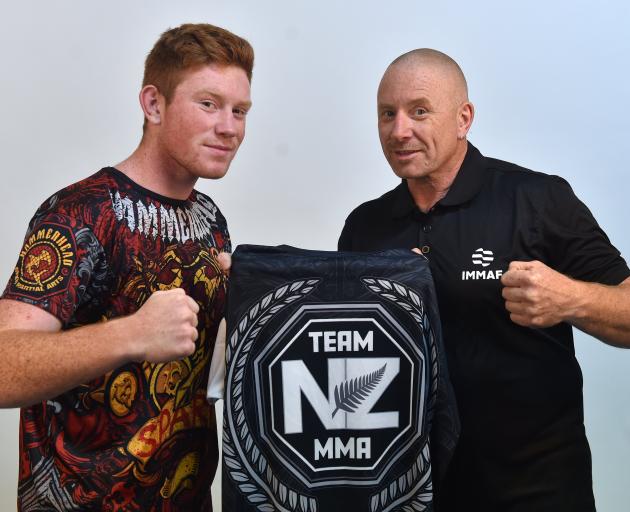 Flynn and Howie Booth are doing well in MMA. Photo: Peter McIntosh
It would seem logical that Flynn Booth would take up mixed martial arts. But his father, Howie, said he never pushed him into it. Jack Salter catches up with the Booth family.

It is in the bloodlines.

Next month he will officiate at the International Mixed Martial Arts Federation (IMMAF) Oceania championships in Melbourne, where son Flynn will compete for New Zealand.

Howie (55) said while he was proud of Flynn's New Zealand representation, he is more proud of how Flynn has conducted himself around ''training, time management and personal growth''.

''These are all things you can equate to in life,'' Howie said.

He said Flynn started showing a keen interest about two years ago and what he liked most was that the choice to compete was entirely his own.

''The result is not as important to me as the emotional development.''

After taking up the sport last year, Flynn has built up an undefeated two-win record, both via round-one TKO.

Flynn grew up surrounded by combat sports, so his transition to competing is unsurprising.

Howie has been involved in MMA since the late 1990s.

People such as former world kickboxing champion Eric Nosa and his brothers, plus Dunedin's Matt Toa, all trained for a number of years in the converted farm shed on his and his wife's Sawyers Bay farm.

Over the past 10 years, Howie has officiated in hundreds of MMA and kickboxing fights as well as doing some commentary and post-fight interview work, including for his son's last win in Dunedin last December.

He said commentating on his son's fight felt a bit strange at first, but he just had to treat it like any other fight.

The shed is still used every Monday night for training for some diehard regulars.

Howie recently officiated at the Perth UFC show, where he was the only New Zealand official, judging five fights.

The Miller Creative Group labourer described the promotion as the ''big show'' and the ''iconic MMA leader''.

For impartiality and professional reasons, Howie does not comment on fights or fighters, but there is no doubt he loves his role.

Last June was memorable when in the space of six days Howie judged at Auckland's UFC show before working the IMMAF Asia championships in Singapore and then judging on the UFC Singapore event.

He said his wife of 25 years, Kirsty, described the trip as ''Howie Heaven''.

IMMAF is a worldwide amateur regulatory body with about 60 countries on board, including the New Zealand Mixed Martial Arts Federation (NZMMAF). It is closely aligned with the UFC.

Howie officiated at the IMMAF world championships in Las Vegas in 2015, the same year he judged at his first UFC event.

Flynn (18) said his dad's passion was inspirational and his mum always had his mental corner.

His earliest memory was being about 6 and fight-fooling around with the Nosa brothers.

''I was probably a bit of a pain, but they seemed to like having me around,'' Flynn said.

He said, in hindsight, he was always going to compete, given he had soaked in so much.

The day after he turned 18, he got his full driver's licence, and he made his debut in Timaru the following night.

Flynn said he was more nervous walking out to compete than he was sitting his licence, because of people's expectations.

To win his Oceania division, Flynn will have to win up to three fights in as many days in Melbourne, while making weight daily.

The lightweight fighter said he was going there not just to compete, but to win.

The next goal was to make the New Zealand team to compete at the IMMAF world championships in Bahrain later this year.

Howie, along with Toa and two others, founded the Team Hammerhead club in 2007.