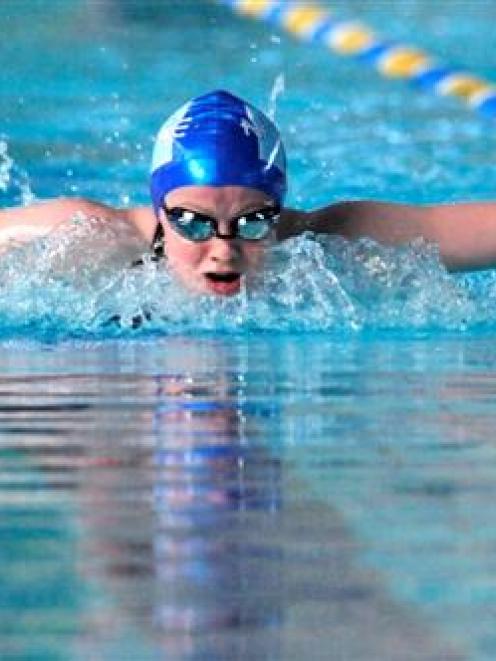 Aleisha Ruske (16) on her way to winning the women's 15-16 200m butterfly final at the Otago swimming championships which started at Moana Pool in Dunedin yesterday. Photo by Linda Robertson.
Aleisha Ruske's chance of winning a New Zealand age group title took a tumble when Swimming New Zealand changed the date of the national championships from early March to April.

Ruske (16), a pupil at St Hilda's Collegiate, is one of the bright young hopes of New Zealand swimming.

Ruske has paid up for a school trip to Vietnam that clashes with the age group championships in April.

She hit the headlines three years ago when she broke a record 10 Otago short-course marks at the annual Neptune meeting at Queen's Birthday Weekend.

At that time she was coached by Punche Tremaine. Her swimming took a backward step when her coach died and she struggled to find pool space to train at Moana Pool. Ruske got back into serious swimming only a month ago when she joined Gennadiy Labara's squad.

The target time for the 200m butterfly was 2min 29sec and she broke it easily with her winning time of 2min 27.18sec.

Ruske edged in front of Sophie Gibson (Queenstown) near the end of the third lap and she took off in the last 50m to win by 6sec.

She had to bring out something extra in the final to beat her clubmate, Devon Familton, who swam 29.10sec. It came in the last 15m when she edged in front with a time of 28.95sec.

Familton pushed Deans back into second place when she won the 200m individual medley in 2min 31.02sec. Deans was timed at 2min 33.47sec.

The Canterbury championships are being held in conjunction with the Otago championships, and the best Canterbury performance went to Jacquie Ruth (QE2) who broke a New Zealand women's AWD record with her time of 4min 33sec for the 200m individual medley.

Satori Dobbie (QE2) had the bad luck story of the night in the boys aged 13 and 14 200m butterfly when he was disqualified.

Dobbie (14), a pupil at Middleton Grange School in Christchurch, is one of the most talented young male swimmers in the country. He won five gold medals at the New Zealand age group championships last year.

He swam a personal best time of 2min 15.18 seconds but it did not count because he had breached the start rule.

Swimmers are not allowed to swim under water beyond the 15m mark. Dobbie was disqualified when his head popped out over the mark.

''I tried to get a good underwater start but I misjudged it,'' Dobbie said ruefully.