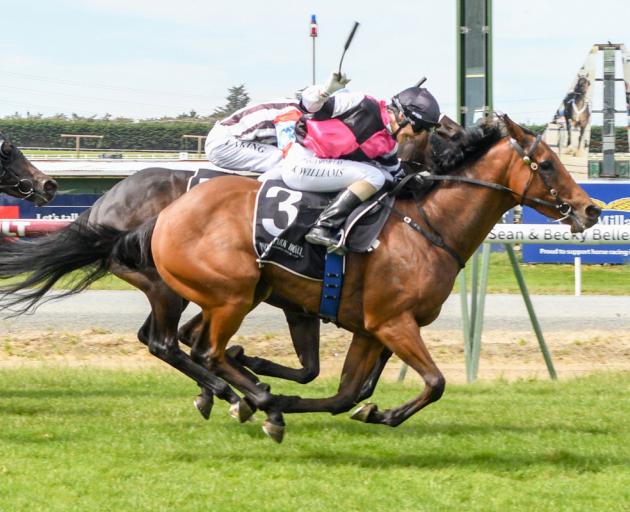 Trainer Kelvin Tyler said the galloper was "the real deal" before the listed 1600m feature at Ascot Park and Lightning Jack did not let him down.

Tyler, who trains in partnership with daughter Aimee, did not want to get ahead of himself as his horse tried to go unbeaten in the two legs of the Southern Guineas Triple Crown that he contested.

But he could not help but be confident, given the way Lightning Jack has progressed since his Gore Guineas win.

"I’ve said all along he is a good horse and without being over-confident, we had expected him to do that again today," Tyler said in his post-race interview.

Rider Kylie Williams had few options but to drift back at the start with Lightning Jack, who drew the widest starting stall.

That effectively meant the Per Incanto galloper gave his rivals a head-start throughout.

But it did not have Tyler the least bit concerned as he watched.

"[Kylie] rode him like the best horse in the field and when he got to the outside turning for home," the trainer said.

"I knew just what a turn of foot he has so I was thinking then he was going to be hard to beat."

Tyler has previously said he is looking forward to stepping Lightning Jack over 2000m.

However, that may have to wait, as the 3yr-old could have the 1400m Wellington Guineas on his agenda.

"He just keeps improving and he liked the step up in distance, so hopefully there is plenty more in store for him yet.

"We are looking at taking Feel The Rush to Trentham for the [New Zealand] Oaks next month so this guy could go with her as a travelling companion," he said.

"A race like the Wellington Guineas appeals, as I think the big roomy track there would suit him perfectly."

Tyler will assess how Lightning Jack came through Saturday’s race before making any firm plans for the horse.

Feel The Rush ran third behind Scooby in rating 72 company over 2200m on Saturday.

The Steven Prince-trained galloper, who started at $49 win odds, had the lead short of the post before being overhauled by Lightning Jack.

A half-neck margin split the first two, with Asathought a further length and a-quarter away in third.

Williams produced a patient ride in a hectic event to bag a feature race double at the Invercargill meeting.

Beam Me Up Scotty scored just his second career win in taking out the 2600m race.

Wingatui sprinter Always On Call took full advantage of the big drop in class she faced in race 3.

The Terry Kennedy-trained 6yr-old had competed in the listed Hazlett Stakes and a premier event at Wingatui before winning in rating 72 company for rider Chris Johnson.

Johnson rode three winners at Ascot Park to take his career tally to just 16 wins short of setting an all-time record for wins in New Zealand.