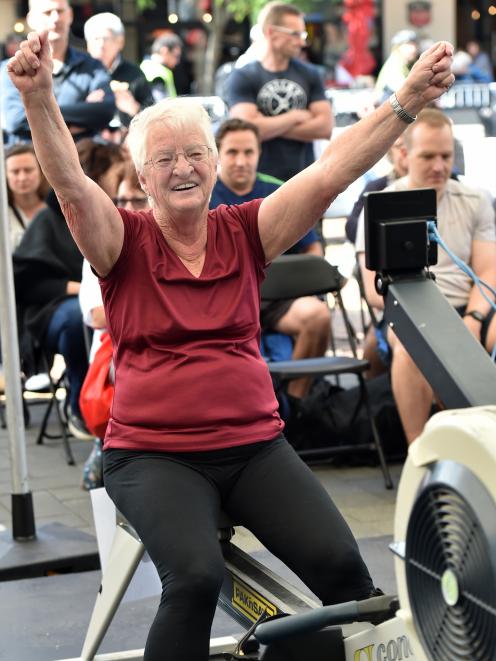 Barbara Sharp is elated after winning her class in the 1000m row. PHOTO: PETER MCINTOSH
Barbara Sharp came to Dunedin hoping to break a world record.

She ended up settling for several New Zealand records.

The 80-year-old came up just short of the 500m world record for her age in the indoor rowing yesterday at the Octagon.

Her time of 2min 9.1sec was two seconds shy of the world mark.

However, it was more than enough to break the national record.

It had been something she decided to aim for at her last birthday, having broken all
the records in the 75-79 age group.

"I’ve been semi-training for it — lots of wishes from all my friends and family trying to give me confidence to do it."

It was Sharp’s fifth year doing indoor rowing and her second time competing at the Dunedin Masters Games.

She began when the Levin swimming pool was closed for maintenance.

She and a friend decided they had to stay active, so they went to the gym.

They decided to have a go on the rowing machine and she became hooked.

She now mixes rowing and swimming — doing each twice a week.

Keeping active was the key to remaining fit and able to exercise, she said.

"I think it’s the good farming stock I come from.

"Also, a positive attitude. I think you’ve got to keep doing things.

"You can’t just sit back and think that’s the end of life once you reach 80.

She hoped to keep doing it as long as she could.

When she could not do it, she would find something else to do.

"It’s getting harder to do, now that I’m getting a bit older.

"But I still love it, I still enjoy it, even though I can’t talk once I’ve finished."