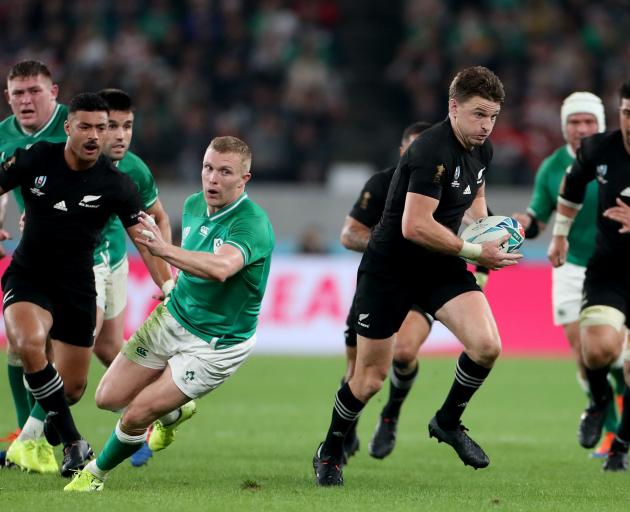 Beauden Barrett put in an imperious performance from fullback. Photo: Getty Images
Now that was a statement to make.

The pressure was on and when the pressure goes on, champions respond.

The All Blacks made a big statement in the win over Ireland on Saturday. The side was ruthless in everything they did. The team was physical and accurate up front and quick and precise out the back.

The men in black were light years away from the side which deservedly lost to the Irish in Dublin last year.

Ireland was gone by halftime as the All Blacks steamrolled the men in green, who were left chasing shadows.

If Joe Schmidt was listed on the sharemarket, how much would his stock have plunged over the weekend?

Talking of coaches, does this just make Steve Hansen even more respected?

Hansen has come a long way since that rather dry, sometimes sulky, figure when he first came on the scene in 2004 when joining Graham Henry and co.

His personality has shown through. He has evolved into a straight shooter, which in this day and age is greatly appreciated. He is not afraid to make the big calls.

Dropping Owen Franks after more than 100 tests was a courageous move, as was moving on players such as Ali Williams and Julian Savea.

There is plenty of talent to pick from in New Zealand but a coach still has to massage all the egos and get the team to play with an edge to win games.

Hansen does that better than most. In fact his record as coach of the All Blacks is nothing short of superb. To coach the All Blacks for 106 games and have just nine losses is staggering in a brutal and competitive sport.

Hansen never reached any great heights as a player. He was just a guy who played in the midfield for Canterbury for a short period but mainly found himself toiling away at club level and at representative B level.

Could that happen now? A good loyal club guy who comes through the system and ends up with the top job.

It almost comes as part of the requirement these days that players to coach at the top level have to have played the game at that same level.

There are advantages in that but great players do not always make great coaches.

The players who did not have the natural talent and had to work hard get to know so much more about the game, can become quality coaches, gain knowledge about the ins and outs of the game, the struggles of the sport.

Hansen had plenty of downs when in Wales and that has obviously driven his thirst for wins with the All Blacks.

Obviously, to get to the top job, a lucky break has to come. But that happens everywhere.

Harrison Ford installed some shelves in director George Lucas's home. He did the same at Francis Ford Coppola's office. Then Tom Selleck turned down the first Indiana Jones movie.

Time and place helps to get a top position.

But one has to back it up.

With a winning percentage of nearly 87% in a highly competitive sport like Hansen had is mightily impressive.

Let's hope that percentage gets a boost in the next couple of weeks.