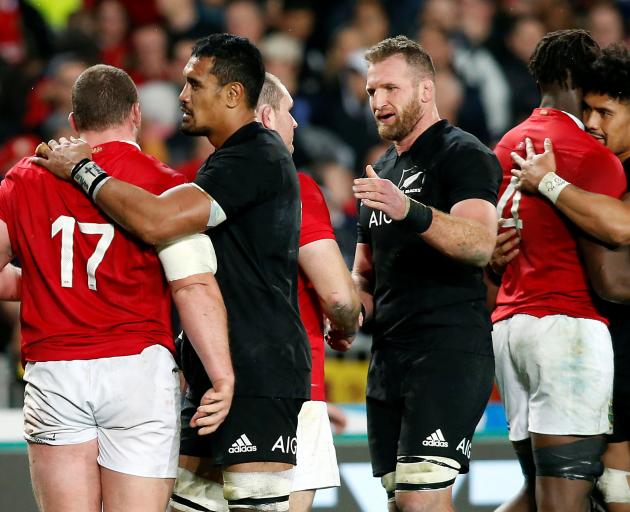 Lions and All Blacks congratulate each other after the final test at Eden Park. Photo: Reuters

Draws never leave anyone satisfied. It is neither a loss nor a win.

So neither side was jumping for joy after a 15-15 draw in the deciding test between the All Blacks and the British and Irish Lions at Eden Park on Saturday night.

The All Blacks came out of the blocks fast and scored a couple of tries in the first half but also coughed up some chances.

The Lions did not offer much in attack but stayed in the game through gritty defence and kicking the goals when they came along.

First-half tries came through Ngani Laumape and Jordie Barrett, but some pushed passes cost the home team. It led 12-6 at the break and as the game tightened up, the All Blacks just could not land the killer blow.

All Black skipper Kieran Read said the draw was tough to take but he did not favour playing extra time to find a winner.

''It is a three-match series so you should be able to get the win,'' Read said.

''I don't think there has been too many draws. You just have to look at it as two teams who went really hard and maybe it was the right result ... probably you would split the decision.''

Read brought up his 100th test, and said it was one of mixed emotions.

''It is a bit of a hollow feeling, a draw. We don't turn up on Saturday to draw or lose, we want to win. Looking back on this series and yep, a draw is better than a loss ... I am proud of making 100 tests but I would probably swap all of them for a win.''

The game swung in the final two minutes, when referee Romain Poite intially penalised Welsh hooker Ken Owens being offside from the kick-off, only to rule it as accidental after looking at it again.

Lions skipper Sam Warburton said he had to ask the question.

''It is a shot to nothing at that point and is worth asking the question. To be fair, all game he was pretty receptive to having a look at things which had happened,'' he said.

''Most referees would make a call and stick with it. But this series they have been really good in being able to go back and have a look at something. If you question something 10 or 15 times a game, then they won't listen to you.

''But in those sort of situations less is more, so luckily he listened to the question ... it is not a penalty offence, in my opinion.''

The All Blacks could not score from the resulting scrum, though it went close.

Best for the All Blacks were locks Sam Whitelock and Brodie Retallick, while Jordie Barrett impressed in his starting debut.