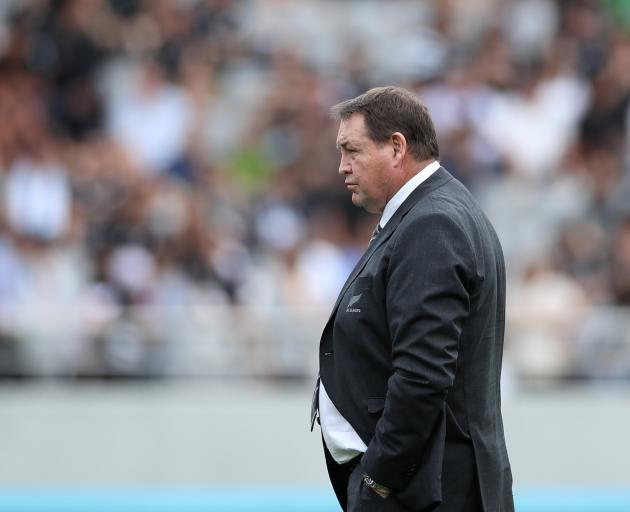 Steve Hansen was far from pleased with the All Blacks' first half performance against Namibia. Photo: Getty Images
In attempting to adjust what he believed was an All Black attitude problem against Namibia in the first half, coach Steve Hansen took the direct route; he gave his players a halftime rev-up to end all rev-ups.

"It was one of the better ones and rightly so," said Dane Coles after the 71-9 victory at Tokyo Stadium. "We deserved it so he got into the boys. It was direct, old school; it was bloody good. You don't see too much of that these days so I was bloody enjoying it."

Hooker Coles, who replaced Codie Taylor during the win also notable for two yellow cards to props Nepo Laulala and Ofa Tuungafasi, said he would rate the verbal torrent a nine out of 10 on the dressing room Richter scale, adding he knew what was coming as soon as Hansen uttered his first word.

Hansen told the assembled media that part of his team's mental approach problem may have come because the All Blacks didn't train as hard over the previous four days following their 63-0 win over Canada in Oita.

Adding to that is the fact that as the 23rd ranked team in the world, Namibia were never going to be a serious threat. But it was a malaise that may have subconsciously affected the management group too, Hansen said, and one which was quickly put right after halftime.

The All Blacks scored four tries before the break and seven after it, a period during which they were far more accurate and physical at the breakdown. With that came quick ball and space for their multiple attacking weapons, including Sevu Reece, Jordie Barrett and Ben Smith, all of whom scored two tries each.

"We didn't turn up with the right attitude and a lot of the boys are disappointed with the first half... the first 30 minutes especially," prop Angus Ta'avao said. "Give a lot of credit to Namibia, they came out firing and are a very spirited team - very physical. We didn't look after our rucks that well and were a bit sloppy around the tackle area. And that was what Steve was really talking about. We needed to get back to being direct and getting back to our basic things. We showed a lot more of that in the second half."

Were Hansen's words strong? "Yes they were... 100 per cent right and they had every right to be, although we were aware of it, we needed that and the boys came out firing in the second half and got back to being direct and looking after the ball.

"Hopefully we shouldn't really need that from Steve again. I haven't seen him [like that] in my short time in the black jersey, but I haven't been in a side where we have started like that.

"It was good to see. Every coach needs to have that. You have to keep the boys honest when you need to. But hopefully that is the last time he needs to step in because it is our job as players to do our jobs."

The victory took the All Blacks to the top of Pool B ahead of their final pool game – Italy in Toyota City on Saturday. Italy have not impressed so far; they have wins over Canada and Namibia but were poor in losing 49-3 to the Boks in Shizuoka recently.

Regardless, the All Blacks are likely to take a new attitude into that match along with a new line-up. Richie Mo'unga and Beauden Barrett are likely to be back, as is Kieran Read. The All Blacks will be in knockout phase mode and the mental approach will be expected to be ruthless. Another rev-up is unlikely to be required.