Murdoch remembered as tough but gentle 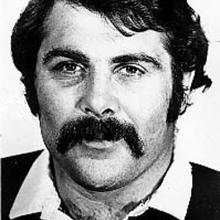 Murdoch played 27 matches, including three tests, for New Zealand, but the prop will always instead be remembered as the first All Black to be sent home from a tour for an off-field infraction.

"I don’t think he ever got any peace after it. It was an unfortunate thing that happened to him," Duncan Robertson, who played with Murdoch for Zingari Richmond and Otago, said yesterday.

"There’s a story in behind it that I don’t think will ever be told because it affects too many people."

December 2, 1972 should have been a red-letter day for Murdoch — he scored his only All Black try that day in a narrow win over Wales.

Instead, an incident with a security guard — the full details of which have never been revealed — resulted in Murdoch being sent home.

Afterwards Murdoch attempted to slip into obscurity, moving to a remote part of Australia, but the mystique of the story meant he often returned unwanted to the headlines.

"All that rubbish which went down and all that stuff in Britain, it was horrible for Keith and horrible for his family," Jeff Matheson, an Otago prop who was on the 1972 tour with Murdoch and who also worked with him as a fencing contractor, said.

"It absolutely changed his life."

Matheson maintained contact with his fellow forward, whom he described as a gentleman.

"He was tough, but he was a gentle too, he really was ... I’m very upset tonight.

Robertson said he had a sneaking suspicion a word from Murdoch might have led to his own eventual selection for the All Blacks.

"I know he was feared off and on the paddock, but off the paddock I always found him a gentle giant - and I spent a fair bit of time with him off the paddock  ... It’s just a shame what happened to him."

Murdoch was always polite, but could be ruthless at times, Robertson said.

"They were half-truths, and why would you let the truth stand in the way of a good story?

"He always stood up to people and they respected him ... but I always found him a good bugger."

As a player Murdoch was tough and incredibly strong, Robertson said — strong enough to take on Colin Meads.

"He took the ball in a trial game against Meads at No2 in the line out and Meads said ‘that’s mine, you don’t jump for that’," Robertson recalled.

"Keith just stood there and said ‘Is that your best shot?’ and Colin said ‘No, I was just practising’."

Murdoch played 43 games for Otago, as well as six matches for Hawke’s Bay and two for Auckland.

The flag was hanging at half-mast over the Zingari Richmond club rooms yesterday, and chairman Stephen Baughan said it was a sad day for all at the club.