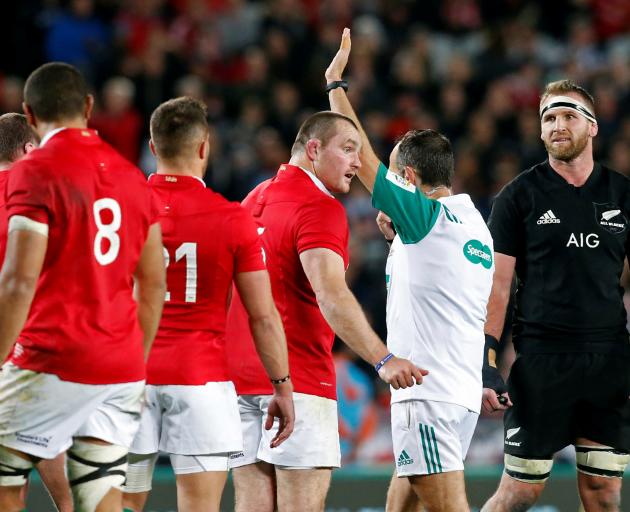 All Black captain Kieran Read (right) reacts after no penalty was given for the offside of Lions' Ken Owens. Photo: Reuters
So a stalemate was played out. Can you lose a game when you draw?

Well, it felt that way for both teams but for the home side it really was one that got away.

It had plenty of chances but just could not finish. And really why was that?

Was it that lack of experience missing with Ben Smith, Dane Coles and Sonny Bill Williams on the sideline?

Was it the referee, who changed his call, when most men in the middle would have just ignored advice from above?

Or was it the British and Irish Lions defence which held firm under a severe examination.

But good sides do not blame outside influences, whether the referee or missing players.

Perhaps the All Blacks need to look at their preparation and, like any proper New Zealander would, blame the Australians.

Is the reason the All Blacks have not quite nailed it this series because of the Super Rugby competition?

Many of the All Black have not come up to the required level as they have been taking part in training runs for much of Super Rugby.

Playing rubbish teams such as the Force, Rebels and the Sunwolves is no preparation for taking on a battle-hardened and strong Lions side.

The Cheetahs and the Kings have dropped out of Super Rugby and are now said to be looking at playing in Europe.

Well, why would any competition want them?

They have been cannon fodder for the New Zealand sides. It is all too easy to score tries against these teams.

And when things start to become easy, shortcuts get taken. You get to be able to do things without any pressure on and get led into a false sense of your ability.

The defensive line speed of the Lions was light years ahead of what is seen by Super Rugby teams in Australia and South Africa. It was like heading into battle against the SAS a week after facing up to Dad's Army.

Injuries obviously did not help the All Blacks and the backline which played on Saturday night was one nobody would have picked at the start of the series.

But maybe the depth of New Zealand rugby is not as strong as many have suggested.

It is a bit like Australian rugby league and its depth. It is a bit of a myth.

Those very top, top players in the country, of which there are about a dozen, are well ahead of the next best.

Take a reasonable portion of those away and the gap between the All Blacks and the next best is so much smaller.

But congratulations to the Lions for fighting to the very end and never throwing in the towel.

If this Lions side has showed us anything, it is that grit and determination can get you a long way in this game. It was a side which had the heart of a, um, Lion, and tackled as though their lives depended on it.

Lions attacking coach Rob Howley will never be tagged a genius but defence coach Andy Farrrell deserved a medal for the way he set his defensive systems and never backed down to a side which held most of the attacking weapons.

Although, it has to be said the Lions defence was undoubtedly helped by being 2m offside in most games.

Question: When the Lions return in 12 years will everyone just sit in the stadium and watch the game on their phone? Will the entire stadium be just full of Lions fans and rich corporates types? And why didn't Mrs Barrett have 15 kids?