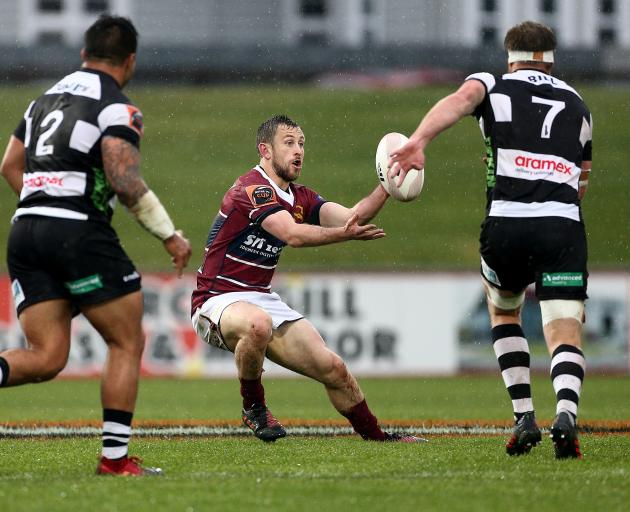 Southland first five-eighth Scott Eade receives the ball during a Mitre 10 Cup game against Hawke’s Bay in Invercargill on Sunday. PHOTO: GETTY IMAGES
Rugby practice is just grand when you are running about in ankle-deep water and it’s hailing.

But then the Southland Stags probably feel they could walk on water this week.

The team posted a 16-10 upset win against Hawke’s Bay in its opening Mitre 10 Cup game which was staged in Invercargill on Sunday.

It is the first time the Stags have started their campaign with a win since 2014 when they beat Bay of Plenty 34-23.

First five-eighth Scott Eade had an impressive game behind a hard-working Southland pack.

It was a damp day in the deep South. The kind of afternoon when the forwards do most of the work and rely on the guy in the No10 jersey to put the ball in the right areas.

"It was awesome to get a win and, as everyone saw at the end, the boys were pretty pumped up about it," Eade said.

"It wasn’t pretty by any stretch but the conditions played a part in that.

"I think it has been about [six] years since we won the first game," he said.

"But it is going to be a much tougher challenge [tonight], I suspect."

Southland will play a talented Bay of Plenty side in Rotorua.

The conditions are expected to be more favourable than the weather in Invercargill this week.

Tuesday’s practice session was blighted by hail. On Thursday the players waded through puddles deep enough to lose sight of their boots.

It was a bit bleak but nothing can dampen the spirits this week.

The Steamers have a talented combination in the halves. Halfback Te Toiroa Tahuriorangi
and pivot Otere Black will no doubt look to use width and test Southland’s defence in the wide channels.

But Eade, who plays for Invercargill club Marist and has made more than 60 appearances for the Stags, reckons his team gets pigeonholed as a wet-weather side.

"People probably have the perception that we play in wet weather and we can only really stick in it in wet conditions. But I think it will be an exciting opportunity for us to show what we can do with the ball in hand.

"Bay of Plenty are quality opposition ... so we will well and truly know where we are at after 80 minutes [tonight]."

The last time Eade was the clear first-choice first five-eighth for the Stags was in 2017. The team went winless that season but the 27-year-old feels he has improved plenty since then.

"I feel like I’ve grown a lot, especially in that mental space.

"I’m just worried about what I can do and not [worry about] that outside noise. It is just about doing my job and putting the boys in the right part of the field."

Eade, who had a season at halfback for the Stags in 2014, was a schoolboy star for Southland Boys’ and went on to play five games for the New Zealand under-20 side in 2012.

He had a stint in the Otago side in 2016 and made one appearance for the Highlanders in 2015, which means he has a Super Rugby title on his curriculum vitae.