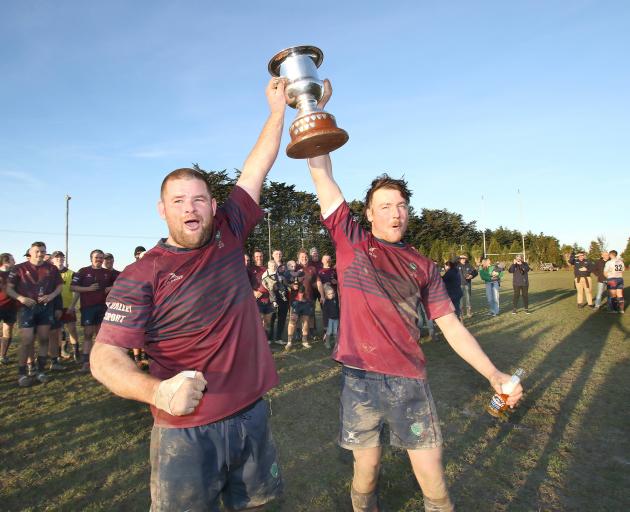 The form book was thrown out the window for the first half as West Taieri was in control of the match. After a scrappy opening five minutes, where both sides were guilty of sloppy handling, West Taieri opened the scoring through halfback Jackson Reid.

West Taieri’s rush defence forced Valley into making uncharacteristic mistakes, but the home side narrowed the gap shortly after through a Thomas Johnson penalty.

Valley took the lead through second five Bineati Teriuea, whose try, handy to the posts, was awarded after a long deliberation between officials over potential foul play in a previous phase. Johnson converted to extend Valley’s lead against the run of play. West Taieri’s set piece became quite a weapon, especially the lineout, where it stole plenty of ball and kept Valley in its defensive third.

Another Valley mistake gave West Taieri great field position, and it scored through flanker Conner Jenkins, whose effort was converted by Callum Smeaton. West Taieri forced another turnover shortly after and extended its lead through lock Steve Green. Smeaton’s conversion gave West Taieri a 19-10 advantage. A late Valley penalty made the scores 19-13 at the break and the home side needed some energy in the second half.

Whatever was said in the huddle worked a treat, as Valley dominated the remainder of the match. The turning point came 10 minutes into the half, when West Taieri flanker Jenkins was sent to the sin bin for a dangerous tackle. Valley scored two converted tries, to fullback Lachie Moore and halfback Jared Edwards, to place it firmly in the lead.

West Taieri wrestled back some territorial advantage and a penalty kicked by Smeaton reduced the difference to 30-22 with 10 minutes left to play.

From another turnover, Valley halfback Edwards broke through tackles to score his second try and put the match beyond doubt. Johnson kept his flawless record off the tee with the final conversion.

It was an amazing second half from a Clutha Valley side that had dropped the ball, was poor at the lineouts and made kicks that did not find touch in the first half, but still managed to stay with West Taieri.

Flanker Maurice Tairua had a very strong match in the loose. His work at the breakdown was unrivalled and he was a strong running option. Prop Lachie Gunson also had a strong game in the pack and key players Jared Edwards and Lachie Moore controlled play for much of the second half.

West Taieri was served well in the first half by halfback Jackson Reid and his sniping runs around the breakdown caused havoc. Skipper Conor Beaton and prop Ethan Hippolite were others to put in full effort. Midfielder Will Scorgie was West Taieri’s best, attacking ruthlessly throughout and he hardly missed a beat on defence.

Clutha Valley will play Cromwell in the countrywide final at Clydevale this Saturday.