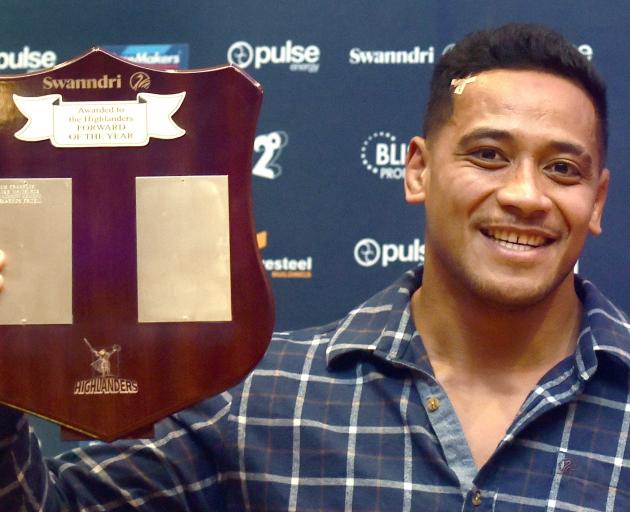 Shannon Frizell. Photo: ODT files
The Highlanders have received a big boost just before what is shaping up as a must-win for both sides at Forsyth Barr Stadium tonight.

Blindside flanker Shannon Frizell (27) has re-signed with the franchise for two more years and will be at the Highlanders until 2023.

Highlanders coach Tony Brown said Frizell had been a standout player since he joined.

"His work rate and the physical commitment he offers on attack and defence are world class.

"His consistent form this year has him right up there as the best in the country at blindside,” Brown said.

“We are of course delighted that Shannon has decided to stay with us for the next few seasons to help us reach our goals.

"He holds a lot of mana among the team and his commitment to the club is good for our future”.

Frizell is excited about what the future holds.

“I have enjoyed my time here. I like Dunedin and the culture of the team. It seems to get the best out of me.

"I want the Highlanders to do well.

"If I can help the team by playing well, then I’m happy," he said.

Frizell has started every game for the Highlanders this season and continues that run tonight.

If the Highlanders can win, the game against the Blues next Friday night under the roof is really shaping to be a key match.

The win in Christchurch last week has brought the southern side back into calculations.

The Chiefs lost their first two games but have come back and won their past two and had the bye last weekend.

They found all sorts of way to lose in the past year but have got that monkey off their back and will be a spirited opponent. T

The Crusaders and Blues still sit in the top two spots but if the Highlanders can win their next two games before the bye they will be in a good position.

The top two teams on the table will play a final at the home of the top qualifier on May 8.