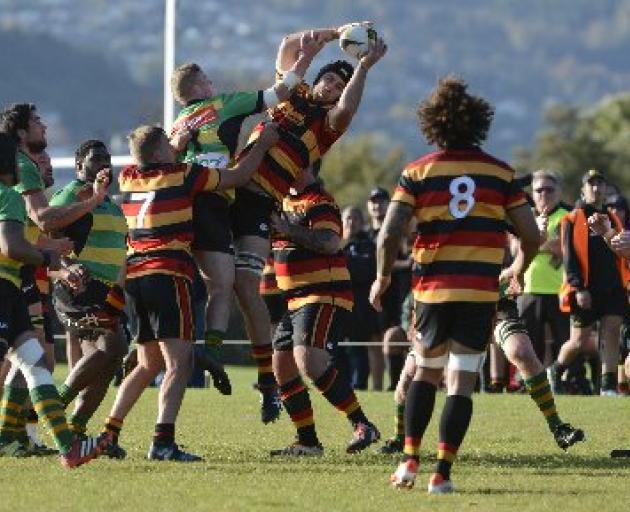 Photo: Gerard O'Brien
It's beyond a joke

So all the clubs met with Otago Rugby prior to the season to discuss the contracted Otago players not being available at the business end of the season.

Otago wanted contracted players out of the club rugby after July 14 so it could have an uninterrupted month of training prior to the first game. The clubs wanted two full rounds and a top four and games played on Saturdays.

A compromise could not be reached and thus the 28 contracted players are not playing this weekend or in the finals.

Lance (Abramovich) Spence said at that meeting if Harbour made the finals it would possibly have to default because of the number of contracted players it may have.

This almost came to fruition. Harbour was perilously close to defaulting to Kaik this weekend and giving fourth spot to Kaik at the expense of Southern.

Not surprisingly, Southern has lent it some front rowers to get it on the paddock.

But let's call it what it is - this competition is a farce. Taieri and Harbour have no chance of winning the comp as they have at least a third of their players unavailable. Varsity has been given a competition win. All other unions have their rep players in finals. Why not here?

A compromise must be reached for next year or we should scrap the competition as it is farcical.

So Abramovich approached Zingari about merging with Harbour a few months ago but was turned down. Over the past few weeks he has been in discussion with a few Pirates luminaries about merging and the word is things were looking promising. It was then presented to the Pirates committee which rejected it out of hand - fair enough, its prerogative. I'm now hearing the senior club is folding at the end of the season leaving the clubrooms in the hands of the junior club and Caversham Football.

Surely I've got this wrong? Merge with Harbour and keep rugby afloat is the only answer. To those Pirates luminaries, rise up and take your club back!

So it's on at Stadium Greenhouse on August 4 and all rugby people need to support this fantastic concept. Three finals will be played from 11am to 5pm - prem colts, prem IIs and prems.

Under-8/9 kids rugby will be played between games. The junior colts final will be played across the road at the Varsity Oval. In the ODT stand concourse, bars and food stalls will be set up. There will be trucks and bouncy castles for the kid, as well as bands playing.

Only $5 for adults, all kids free - let's make a day of it. And just in, at halftime in the prem final there will be a race to find the fastest kid from all the junior rugby teams in town from under-13 down - see you there.

In Central, Upper Clutha plays Arrowtown in one semi and bosom buddy Wakatip meets Cromwell in the other - Upper Clutha v Wakatip final. In the south, Clutha plays Heriot and Crescent takes on Clutha Valley - Clutha v Crescent final. Owaka destroyed Lawrence last weekend to hand it the wooden spoon. And that happened with two of the female Owaka supporters handing big Willis Paterson, the head honcho of Lawrence, the said spoon - good work. Spare a thought for Jock Bernie, a 300-plus game man for Owaka who has never beaten Lawrence, and he pulled a hammy in the warm-up. Jock, if you dived at the ground, you'd miss! Bad luck, mate.

In the north, does anybody want to ref the final after last weekend? It's between Kurow and Valley and I'm picking Kurow to win its first banner since 1982. But it really is the Wild West up there after the ref was punched by the Old Boys ``water boy'' after Valley upset Old Boys. Absolutely disgraceful and I think the ``water boy'' is at the judicial hearing as I pen this and he may have a date in court later this month.

Destroyed Rugby Roy Daniels with a draw last weekend so the streak continues and on to Lawrence Graham from the Spannerheads but looking at his picks I'm gasping for air. The Hawks will take on Kaik (13+) and will just make up the numbers. The Spannerheads at home at the beloved Toolbox take on the Sharks (12-) whose season is in tatters as they collapse to sixth so GI should win in a canter but I'd rather give the Pirates committee counselling! The Magpies (12-) have to win with a bonus point to have any chance of making the four and should beat the Broncos. The Eels (13+) will jelly Zingers to waltz to the finals.

P.S. Next week I'll discuss the looming promotion-relegation match so don't miss it.