Rugby: Young team sees it through 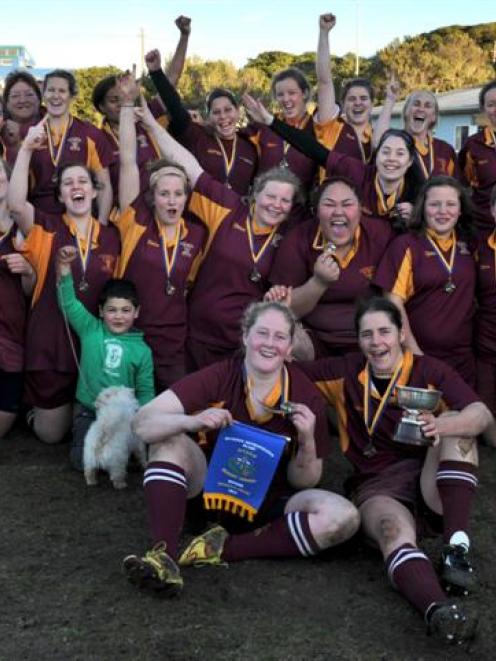 Pirates, a finalist for the past four years and the defending champion, had progressed through the season undefeated.

Alhambra-Union rode its luck to finish third after the round robin and upset second-placed University in the semifinal.

Co-coaches Nan Haua and Jacinta Neilsen had been faced with the daunting task of rebuilding Alhambra-Union virtually from scratch this year, after guiding it to four consecutive banners between 2007 and 2010.

If this was a side short on experience, it certainly didn't show when it came to finals rugby on Saturday.

The forward pack stood up, making sure reputations meant little in taking on the Pirates pack in the set piece, with Pirates locks Amanda Mulock and Epe Elisara and flanker Cherie Jackson standing out.

Hannah-Brennan, in particular, displayed a hunger for work and a commitment to defence and support play.

At times, Pirates must have wondered if Alhambra-Union had extra players on the field.

Co-captains Kerry Stoddart and Megan Kane led the Alhambra-Union pack by example from the flanks, and along with No8 Nicky Crawford successfully shut down Pirates' options.

Halfback Monique Nees complemented the work of the forward pack, providing some top service to the backline.

She set the game alight in just the sixth minute with a spectacular try when she ran from the back of a scrum 30m out to open the scoring.

This stirred Pirates into action, but the home side encountered stiff defence from Ang Taylor, Nikita Fitzgerald, Liti Senibus and Halie Hurring.

Martin then twisted and turned her way out of three tackles before running 20m to score under the crossbar.

Almost straight from the restart, Martin played a role in putting fullback Hurring into space to score.

"I can't believe we got this far," Stoddart said after accepting the silverware.

She was reluctant to single players out for praise, emphasising it was a "fantastic team performance".

"We've got a whole young team now and the whole lot are just going to go everywhere."

Pirates co-captain Victoria Nafatali was full of praise for the Alhambra-Union side.

"Things just didn't turn out they way we wanted things to be," she said.