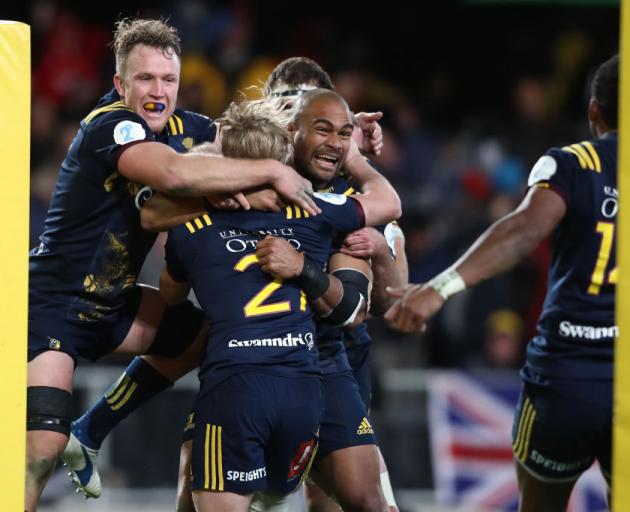 Highlanders players celebrate after winning their game against the Lions. Photo: Getty Images
The Highlanders have clung on to beat the British and Irish Lions at Forsyth Barr Stadium tonight.

Marty Banks kicked a late penalty goal to make the score 23-22, before the hosts had to withstand a final barrage from the tourists.

It was a close game throughout, neither side ever really gaining the ascendancy.

Both sides traded penalty goals early, before Waisake Naholo crashed over for the first try, hitting a gap one-off the set piece. The Highlanders had applied plenty of pressure in the lead up to that, forcing the Lions to make tackle after tackle and eventually it told.

Lima Sopoaga kicked the conversion to make it 10-3.

The Lions struck back, as the Highlanders found themselves under pressure.

A maul sucked the Highlanders forwards in, before CJ Stander committed two defenders in the midfield, offloading and putting Jonathan Joseph into space.

Joseph took the gap and ran untouched to the line and the conversion made it 10-10.

That scoreline remained at halftime, before the Lions scored again just after the break to make it 15-10.

It was one against the run of play, as Tommy Seymour came through and snaffled a cross kick from Sopoaga to run 50m to score.

Had he not pulled it off it would likely have been a try at the other end.

However it was well-read, as the chip and cross kick tactic was one the Highlanders employed regularly all night.

Sopoaga pegged back three points to make it 15-13, before Sam Warburton scored for the Lions after they hammered away for 10 phases on the Highlanders line.

The pressure proved too much to hold and Warburton found space to the left of the ruck, scoring under the posts.

With the score at 22-13, the Lions had a leg up, but it was the Highlanders that finished stronger.

After being stopped on their first attempt, they were able to kick to the corner and score off a maul, Coltman controlling the ball at the back.

That took the score to 22-20 and the Highlanders had the momentum.

A big scrum in the final 10 minutes was key, the Highlanders winning a penalty 25m out and 5m in from the right sideline.

Banks stepped up and slotted it to give the side a one-point buffer.

It was forced to hold on in the dying stages, but it did enough to emerge victorious.