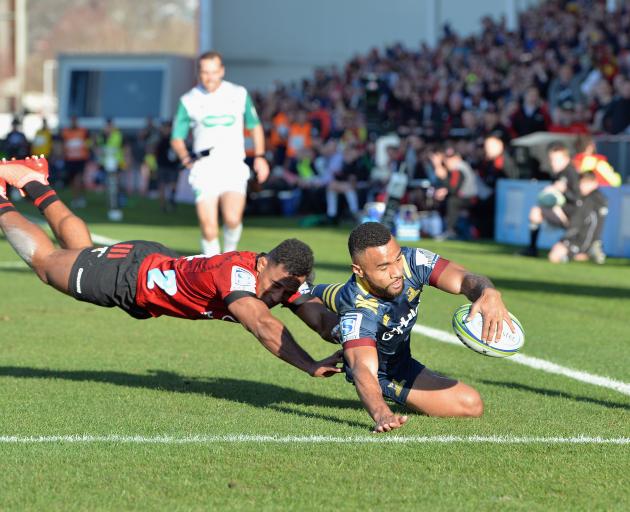 The Highlanders threw it all out there, and more, in Christchurch yesterday in a gutsy and courageous effort but ultimately came up short against the Crusaders, going down 32-22 after the visiting side led 17-13 at the break.

The win means the Crusaders have now won Super Rugby Aotearoa regardless of their result against the Blues in Auckland on Sunday.

The Highlanders were full of energy and left no stone unturned as they rattled the Super Rugby champion in search of a huge upset.

But in the final quarter of the game, the Crusaders put the heat on and eventually went ahead.

Home team winger George Bridge scored two tries inside three minutes to put his side in front for the first time in the game with quarter of an hour left.

By that time, the Highlanders were down to 14 men after Highlanders second five-eighth Sio Tomkinson was yellow carded for a collision with prop Oliver Jager.

It was a harsh call — it was simply a collision which generally happens in a collision sport.

The Crusaders finished it off with a try to centre Brayden Ennor when the Highlanders ran out of numbers although the lineout should never have happened as the assistant referee missed a Crusaders foot in touch from a previous play.

These calls are what have to go a side’s way if it wants to win in Christchurch against the Crusaders.

Highlanders coach Aaron Mauger said he was very proud of the Highlanders’ effort but disappointed with the result.

‘‘There were a couple of key moments in the second half where we missed and then a poor read on defence. They were behind but a couple of quick tries and they were ahead again,’’ Mauger said.

‘‘It was a massive effort from our guys but we just could not quite go to the next level and stick with them for the whole 80 minutes.

‘‘We started well. That is what we wanted to do — put them under pressure and put them in positions which they are not used to. The intensity we brought was outstanding, turned the ball over and got into them which we had been talking about during the week.

‘‘But as we know you’ve got to do it for 80 minutes and that was just where they are so good.’’

Mauger said the performance showed how well the team had made progress.

The side was full of young and inexperienced players who were growing every week and that would be good for the future. He said everyone involved in the team could be proud of the progress made in the competition.

There were some bruised and sore bodies after the game and it is a short week with a game on Saturday.

The Highlanders started the game so well.

The side came out firing and flanker Shannon Frizell went over inside two minutes. The Highlanders blew over a Crusaders ruck, grabbed the ball and, after a couple of phases, Frizell scored.

The Crusaders replied with a Richie Mo’unga try but a timely Jona Nareki intercept had the visiting team out to 17-7 after 25 minutes. Nareki ran 65m to score in the corner.

The Highlanders scored first in the second half, centre Michael Collins burrowing over but he could not hold on. Highlanders winger Josh McKay made a stunning effort to get back and knock the ball out of Bryn Hall’s hands as he went to score.

Aaron Smith had another top game, nearly scoring near the end, while Josh Ioane was dangerous as was Nareki. Up front the loose forwards shaded their opponents while locks Pari Pari Parkinson and Jack Whetton worked hard.

In Wellington on Saturday night, the Hurricanes beat the Chiefs 31-18 to consign the Chiefs to their ninth successive loss.

The Hurricanes scored two tries to Peter Umaga-Jensen in the first half and always looked a step faster than the Chiefs.

The Hurricanes will take on the Highlanders on Saturday night at Forsyth Barr Stadium in the final round of the Super Rugby Aotearoa competition.