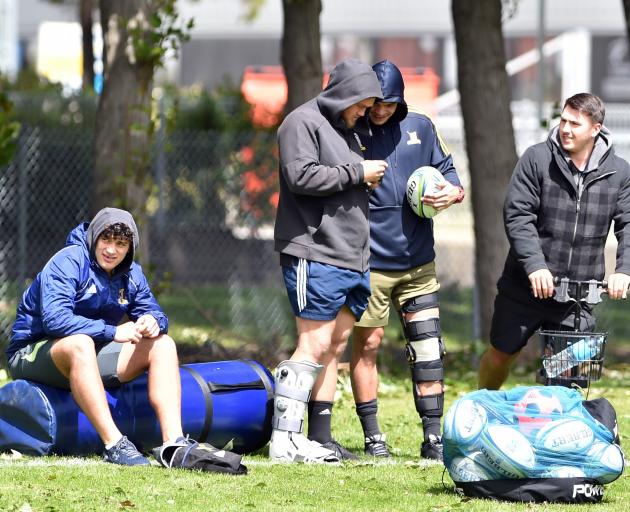 Injured players (from left) earlier this week. Thomas Umaga-Jensen, Jeff Thwaites, Ngane Punivai and Ricky Jackson watch at Highlanders training. Photo: Gregor Richardson
As the Highlanders prepare to take their pre-season to the next step, they have lost a promising youngster.

Hooker Ricky Jackson will not take the field in Sydney next week, having been ruled out for the season with a high ankle sprain.

The 21-year-old has undergone surgery to stabilise the ankle and is hoping to be back for the Mitre 10 Cup.

He has been replaced by Bay of Plenty hooker Nathan Vella.

It is one of several injuries in the squad as it prepares to play the Waratahs next Friday in its first pre-season match.

Prop Jeff Thwaites has also hurt his ankle and will miss the first few rounds.

Utility back Ngane Punivai will return early in the season from a knee injury, while midfielder Thomas Umaga-Jensen is hoping for a late-season return.

Rob Thompson has been injured, but should be back to face the Crusaders in two weeks.

The three All Blacks — Aaron Smith, Shannon Frizell and Liam Coltman — are also missing until Monday and will not be available for games until the season starts.

A January 31 start date for Super Rugby — although the Highlanders have a bye first up so will wait until February 7 — has made for a shorter pre-season.

The squad regathered on Monday from its Christmas break and was now looking to add detail to its game.

Coach Aaron Mauger said fitness had been the focus through December and the team was looking good in that regard.

The main thing was to get as much as possible out of each session.

‘‘It comes with its challenges being a few weeks earlier,

but it puts the onus on us to make sure we’re really clear with our planning and we get what we need to out of each session.

‘‘Prioritising as we’ve gone through the pre-season has been key, making sure we get our big blocks in first.

‘‘We feel like we’ve done that well and now it’s just about getting the detail.’’

Mauger said the Highlanders were in contact with the Waratahs about the bushfire situation in Australia.

At this stage there were no concerns about the game going ahead, or flying in and out of Sydney.

Making sure the team was in a position to test different parts of its game was now important.

‘‘We’re not going to be the finished article against the Waratahs.

‘‘But we want to be in a position where we can learn from the pre-season in all the stuff we’ve been putting in place [and making] sure we come away with confidence heading into that second pre-season game.’’