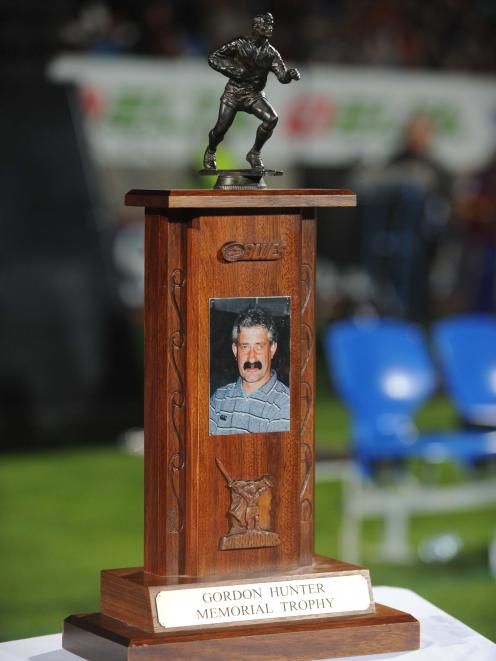 Photo: ODT.
The Highlanders have talked plenty about Gordon Hunter this week and his importance to the game in the South.

The match against the Blues on Sunday will be for the Gordon Hunter Memorial trophy.

First played for in 2002, the trophy, named for the former Highlanders and Blues coach, has been in the Highlanders’ possession since they won in Auckland in 2012.

The trophy is contested at home games of the holder and the Highlanders have reigned supreme at home for the past seven years.

Highlanders coach Aaron Mauger said the team had talked about the trophy and the characteristics which Hunter stressed in his game.

"It means a lot to us. We’ve had to go deep and understand about Gordon.

"A couple of words that stand out for Gordon is love. He created a lot of love in his environment. Loved his team and loved his players. But was also loved back to show the care and support he had for his teams over the years," Mauger said.

"And then courage. He gave his guys courage to go out there and really play and back themselves. I think that is reflected in the teams he coached in the 1990s. Free-flowing footy."

Highlanders co-captain Aaron Smith was motivated by the trophy.

"We would like nothing more to keep the Gordy Hunter at home. We have drip-fed it during the week, people talking about him ... he sounds like someone I would have loved to have played for.

"I have been coached by guys that played under him. Obviously, they have very similar styles in the way he cared for his players. Trusted you to play your game but also a bit of a character off the field as well."

Smith said a few years ago the Hunter family had talked about their father and husband. It had been very moving and motivating and he would be drawing on that for tomorrow’s game.

Mauger said the players involved in the incident in Queenstown had been sanctioned, which would remain in-house.