Another week and more changes.

The Highlanders are still searching for answers in the back three and will front with a new-look loose forward trio for their match against the Fijian Drua in Suva tomorrow.

Coach Tony Brown has tinkered with the back three again as he looks for solutions to what has been a problem area for the team.

Connor Garden-Bachop has been reinstated at fullback and Mitch Hunt, who started in the No15 jersey last weekend, shifts back to first five.

Scott Gregory gets the nod at left wing and Sam Gilbert is preferred on the right wing.

Wingers Mosese Dawai and Freedom Vahaakolo drop out of the game day 23 following the 28-17 loss to the Brumbies.

Brown, who will bring up 100 games as part of the coaching staff for the Highlanders, said the back three was tough to pick given a few injuries and players not really taking their opportunities.

"We just probably feel as though we haven’t had the performances that we’ve wanted in that back three area," he said.

Captain Aaron Smith is back from Covid and will provide some direction at halfback, which means Folau Fakatava drops to the bench. 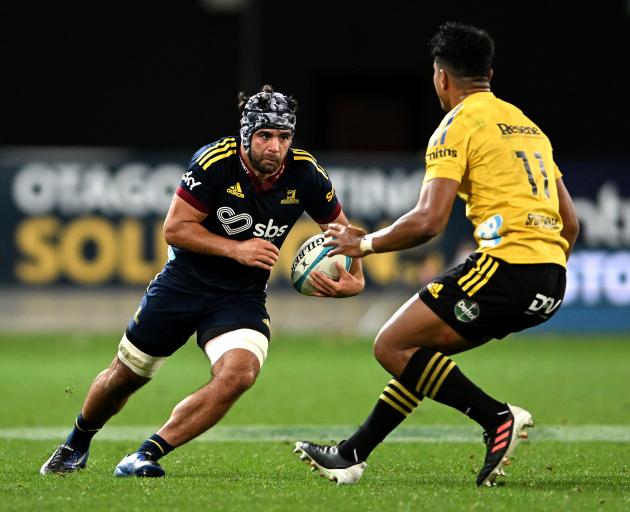 Billy Harmon will make his first start for the Highlanders this season after two appearances off the bench since returning from injury. PHOTO: GETTY IMAGES

Loose forward Gareth Evans picked up a knock against the Brumbies and has returned to Dunedin.

His absence, along with the return of hard-running No8 Marino Mikaele-Tu’u, has allowed the Highlanders to rethink the loose forward trio.

Billy Harmon will start on the openside and Christian Lio-Willie, who made an impact on debut on Sunday, gets a run-on appearance.

"Christian had an awesome debut ... physically, he is a very good ball carrier and impacts the game well.

"It is good to have Marino back, who is a similar sort of player. He is a very good carrier and a very good operator in the width.

"And finally with Billy, he’s 100% fit and ready to go now and it is great to get him back in the team and give Jimmy [Lentjes] a little bit of a rest."

The other subtle change Brown has persisted with this weekend is switching midfielders Fetuli Paea and Thomas Umaga-Jensen around.

Umaga-Jensen started at second five and Fetuli at centre earlier in the campaign.

"There is not a lot of difference, really. It is just getting him in a little bit more space a little bit wider so he can be a little more destructive there, rather than sending him in to dominate defenders.

"We feel as though Fetuli is a physical guy in our backline, both on attack and defence. The No12 position suits him better."

He made his debut for the Highlanders this season after playing 43 games for the Crusaders between 2017 and 2021.

The fixture against the Drua is notable for a couple of firsts. It is the first time the Highlanders will play the Fijian side. It is also the first home game for the Drua, who have been based in Australia for the earlier rounds.