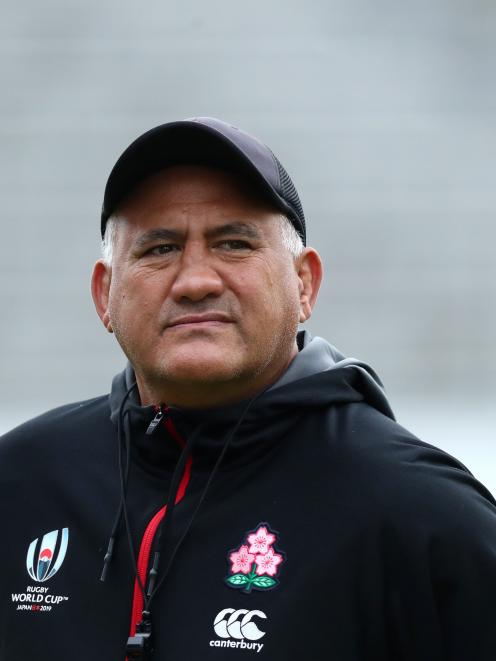 Jamie Joseph. PHOTO: GETTY IMAGES
Jamie Joseph has ruled out taking charge of the Highlanders but admits nothing is for certain in the current world.

Joseph is contracted to coach Japan until the World Cup in 2023 but is in limbo as Covid-19 casts a wide shadow over the international game.

He has been back in Dunedin since March and a planned tour to Europe by Japan to play in a eight-nations tournament in November has been canned by the Japanese union.

Joseph said he could get to Japan and coach the national side but there was too much risk in Europe while Covid-19 was still around.

Joseph said the Japanese assistant coaches and others who assisted the team were not able to get into Japan. They were kept out because of strict government restrictions. It was too difficult to prepare a team with limited resources.

Joseph understood why the side could not come together and play and accepted it was the way of the world at this time.

"It is pretty disappointing that we cannot get our team together. We had such a good team last year and were looking to kick on. But this is the new world that we play in," Joseph said.

It was important to keep the momentum from the World Cup going but Joseph said everyone was in the same boat.

"You look at South Africa. They won the World Cup and have not even been allowed to play in their own country yet."

Going to Japan and then heading to Europe, and then coming home again could add up to six weeks in isolation for those involved.

Joseph coached the Highlanders for six years from 2011 to 2016 and won the Super Rugby title in 2015, the side’s only title win.

With head coach Aaron Mauger parting ways with the Highlanders this week, the hunt is on for a new man in charge.

Joseph said he could not coach the Highlanders as he was coaching Japan. It would be too hard to commit to both although everything was changing.

If international borders stayed closed for years everything was up in the air.

Joseph said he was feeling for Mauger.

He had a personal relationship with him and counted Mauger as a friend.

As a coach it was tough to see another coach move on from a job.