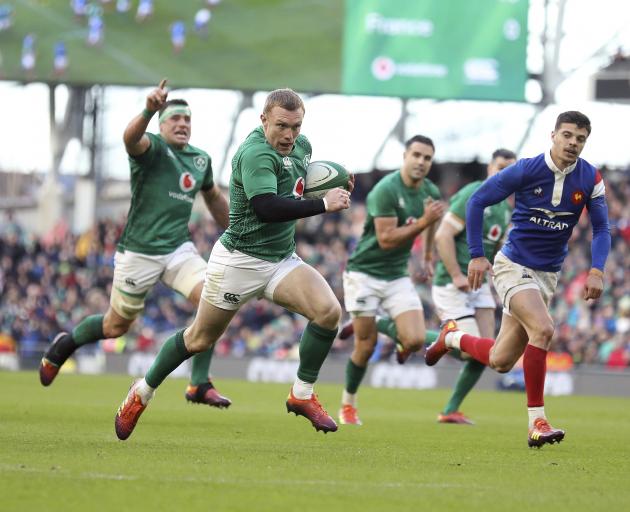 Ireland's Keith Earls breaks through to score a try against France during their Six Nations rugby union international match between Ireland and France at the Aviva Stadium in Dublin, Ireland. Photo: AP
The Ireland that wears the Six Nations crown finally turned up on Sunday in mastering France 26-14 at Lansdowne Road.

Armed with easily their best performance of the championship, the Irish will finish in Cardiff next weekend with an outside chance of retaining the title against Grand Slam-chasing Wales. Ireland needs to beat Wales, and England to lose to Scotland.

The Irish were shattered by England in their opening-match defeat and struggled to piece themselves together against Scotland and Italy, winning only because their opponents were even poorer than themselves.

Everything finally clicked in place as Ireland dominated France to earn a bonus-point fourth try inside an hour and lead 26-0.

That was the point when halves Conor Murray and Jonathan Sexton, the front row of captain Rory Best and props Cian Healy and Tadhg Furlong, and lock Iain Henderson were taken off to be saved for Wales.

The replacements missed more scoring chances to give coach Joe Schmidt and captain Best an even better send-off in their last home Six Nations match, and dropped their guard to let France score two converted tries in the last four minutes.

The scoreline still flattered a fresh and improving France side which was thoroughly outclassed.

"That was getting closer to the sort of performance we expect from ourselves," Best said.

Ireland was on attack from the kickoff, after Jordan Larmour, starting after fullback Rob Kearney injured his calf on Saturday, forced a lineout near the French tryline. Two lineouts later, thrower Best got the ball back from catcher Henderson and planted it in the left corner.

The second try was harder to nail down. Ireland gave up a turnover on the French tryline, and Healy missed a try when he dove at the ball behind a French ruck and tapped it instead of pressing it down. Sexton then knocked on in front of the line from a lineout overthrow.

The try finally came from yet another lineout, when the French backs fell for a dummy run by Larmour, and Sexton doubled round center Garry Ringrose to run in untouched.

Moments later, Ringrose brilliantly caught an up-and-under by Sexton, but the try was ruled out when video review showed he lost control while sliding between the posts.

The interval didn't come soon enough for France, which finally came out of its half. Ireland led 19-0 but it felt like 38-0. They enjoyed an incredible 94 percent territory and 82 percent possession. France had to make 125 tackles in the half, Ireland only 21.

"To dominate like that in a Six Nations game is rare," a delighted Schmidt said.

Murray and Sexton have been struggling to impose themselves coming back from neck and knee injuries, but they directed the action superbly, and Schmidt credited that to the forwards' platform.

Wing Keith Earls scored the fourth try, originating from another lineout. Earls was loitering behind a ruck when No. 8 CJ Stander drew the defense and his inside pass put Earls in a gap and away for his 30th test try.

At 26-0, having scored four tries against France for the first time in 13 years, Ireland's bench was emptied, and the replacements missed a couple of good chances.

Then Larmour stepped defenders in a rousing 20-meter run to the tryline, only to become isolated and turned over. That was Ireland's last shot.

France somehow conjured up late converted tries to Yoann Huget and Camille Chat, ruining Ireland's golden chance to blank them for the first time since 1928.