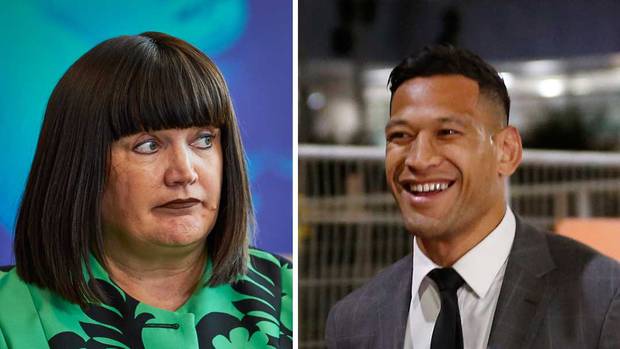 The 30-year-old Folau was after $14 million in compensation for wrongful termination after RA sacked him for a code of conduct breach when he said on Instagram earlier this year "hell awaits" gay people.

RA was determined to hold its ground as mediation ordered by the Federal Circuit Court began this week and a marathon 12-hour session on Monday failed to yield a result as both sides remained at loggerheads.

However, on Wednesday afternoon, Folau and RA released a joint statement saying they had reached an agreement, settling for a confidential amount.

The Daily Telegraph reports that Folau received $8 million in the payout.

Castle went on Twitter to say the settlement number was confidential.

Yesterday's statement said Folau "does not condone discrimination of any kind" and also reinforced RA's position that it does not agree with his views because the governing body preaches inclusiveness within the sport.

Both parties apologised for any hurt the damaging saga has caused.

"Rugby Australia, NSW Rugby and Israel Folau have today settled their legal dispute following the dismissal of Israel Folau after he posted a religious message on social media," the statement read.

"Mr Folau wants all Australians to know that he does not condone discrimination of any kind against any person on the grounds of their sexuality and that he shares Rugby Australia's commitment to inclusiveness and diversity.

"Rugby Australia and NSW Rugby do not in any way agree with the content of the social media post. Inclusiveness is one of rugby's core values and it welcomes all people to the game, including all members of the LGBTI community.

"Rugby Australia and Mr Folau wish each other well for the future. The Parties do not intend to comment further on the terms of their settlement as it is confidential."

Last week Folau lodged an updated statement of claim in the Federal Circuit Court, upping his pursuit of damages from $10 million to $14 million.

Folau justified the $4 million increase in part by saying he was in line to captain the Wallabies, which would have boosted his income. But that assertion was rubbished by former teammate David Pocock.

"I think Michael Hooper has been doing a great job and he's contracted to the next World Cup so I'm not sure where Izzy's getting that from," Pocock said on Fox Sports News last week.

"My view has been that sport is at its best when it's challenging society to be more inclusive.

"I think we can play such an important role in trying to instil values of fairness and inclusivity into kids coming through.

"I found it incredibly disappointing the way he's used his platform around this."

He also claimed he stood to make up to $1.5 million a season for one or two years with Rugby Australia and a Super Rugby club after 2022.

Folau suggested he would have earned up to $1.5 million a year for two-to-three years had he chosen to play overseas after his international career ended.

Estimates provided over lost sponsorship dollars and the missed revenue that comes with competing at World Cups and possibly captaining the national team were also used to justify the controversial star's $14 million demand.

How the Folau saga unfolded

Folau weighs in on the gender birth certificate debate in Australia, saying again homosexuals will go to hell.

A short while later, Folau warned sinners would be going to hell unless they repented with this Instagram post:

Those that are living in Sin will end up in Hell unless you repent. Jesus Christ loves you and is giving you time to turn away from your sin and come to him. _______________ Now the works of the flesh are manifest, which are these , adultery, fornication, uncleanness, lasciviousness, idolatry, witchcraft, hatred, variance, emulations, wrath, strife, seditions, heresies, envyings, murders, drunkenness, revelings, and such like: of the which I tell you before, as I have also told you in time past, that they which do such things shall not inherit the kingdom of God. Galatians 5:19‭-‬21 KJV _______________ Then Peter said unto them, Repent, and be baptized every one of you in the name of Jesus Christ for the remission of sins, and ye shall receive the gift of the Holy Ghost. Acts 2:38 KJV _______________ And the times of this ignorance God winked at; but now commandeth all men every where to repent: Acts 17:30 KJV _______________

Rugby Australia later confirmed it was investigating the comments, saying in a statement the posts were "unacceptable" and "disrespectful".

Wallabies sponsor Qantas join the growing chorus of outrage at Folau's posts, saying the comments "clearly don't reflect the spirit of inclusion and diversity that we support".

Wallabies coach Michael Cheika says he will not select Folau for the Wallabies after his "disrespectful" social media posts attacking gay people.

It is revealed that Folau plans to contest any action taken by Rugby Australia and that the governing body could find itself in a precarious position, with major sponsors closely monitoring the ongoing saga.

The panel for Folau's code of conduct hearing is confirmed, with John West QC the chairMAN. RA's Kate Eastman SC and Rugby Union Players' Association representative John Boultbee AM are announced as the other panellists as Folau fights to save his career.

Video emerges of Folau fighting back tears while delivering a sermon at his church on Easter Sunday.

Ian Roberts, the first Australian NRL player to publicly come out as gay, issues an emotional message to Folau warning that "literally kids in the suburbs are killing themselves" over remarks like Folau's.

Folau is found guilty of high-level breach of Rugby Australia's code of conduct after a four-day hearing in Sydney.

Folau says he's "at peace" with the verdict, according to outspoken Australian radio host and former Wallabies coach Alan Jones.

Folau is dumped as brand ambassador by sportswear company ASICS over his homophobic comments.

It is revealed that Folau turned down an offer of $1 million to walk away from his contract and that he refused to remove the social media posts when offered a lifeline by RA.

Folau's relationship with long-time manager Isaac Moses is reportedly on the rocks, as the 30-year-old fullback "all but turned his back" on the man who has been in his corner since he was 14.

Australian media report Folau will take RA to the Supreme Court if his $4 million contract is terminated.

Folau's contract is terminated by RA, with chief executive Raelene Castle saying the outcome is a "painful situation for the game".

Folau launches legal proceedings with the Fair Work Commission against Rugby Australia and the Waratahs. It is later reported that he is suing them for $10 million for "unfair dismissal".

Folau lodges an updated statement of claim in the Federal Court, now demanding $14 million in damages from Rugby Australia, claiming he could have been captain of the Wallabies.

Folau starts his legal battle against Rugby Australia with a mediation meeting at the Federal Court in Melbourne.

Folau and Rugby Australia announce that they have reached a settlement.