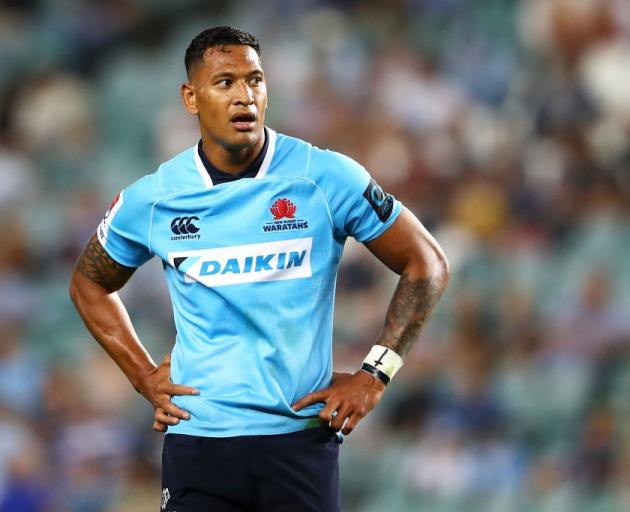 The Daily Telegraph says that Folau, who inked a $4 million four year deal last year, refused to have the additional clauses retrospectively inserted into the contract.

If this is so, it will place added pressure on RA's Kiwi CEO Raelene Castle, whose tenure has turned into a giant headache because of Folau's inflammatory social media posts.

Folau has until this evening to lodge notice that he will fight the termination of his RA contract.

RA believe they are still on safe ground, because they will argue the Wallaby star breached the standard player code of conduct by vilifying others because of their sexuality.

The Telegraph labelled the contract situation as a "bungle" which could leave RA facing action under workplace anti-discrimination requirements.

Folau's defence will be based around him being punished for expressing his religion's beliefs. The report says the lack of social media clauses are central to his defence.

But he would appear to still be facing a major battle.

The NSW Anti-Discrimination Act 1977 (Section 49ZT) states: "It is unlawful for a person, by a public act, to incite hatred towards, serious contempt for, or severe ridicule of, a person or group of persons on the ground of the homosexuality of the person or members of the group".

A spokeswoman for The Workplace Employment Lawyers said RA can argue that Folau breached his contract by going against legally correct direction RA gave him.

"'Free speech' in the workplace is qualified by employee's obligations under their contract. In this case, it appears that Folau was told about RA's policies and its expectations in relation to his conduct," she said.

"Given the history, and as Folau is a public figure, RA is likely to have grounds for taking disciplinary action which may include termination of his contract."

She added: "The NSW Anti-Discrimination Act protects against a 'public act' which amounts to vilification.

"We are not aware of any case law considering vilification in the context of argued religious expression in the workplace.

"However, recent cases show that vilification via social media is being considered by the courts."

Folau could be thrown a lifeline - by the English Super League.

According to foxsports.com.au, the RFL have refused to shut the door on the 30-year-old dual-code superstar as the fallout continues from his latest anti-gay comments on social media.

As a result, the 62-test veteran has been left fighting for his career with Rugby Australia on Monday issuing him a breach notice, effectively tearing up his lucrative four-year deal.

Wallabies coach Michael Cheika has already said Folau is unlikely to play for him again, while the Waratahs have stood him down indefinitely.

A return to the NRL has also been ruled out after ARL Commission chairman Peter Beattie told the Daily Telegraph Folau "doesn't pass our inclusiveness test" and that the organisation "wouldn't support him playing rugby league again".

The Super League could, however, be a potential avenue for Folau, with foxsports.com.au reporting he could make a return to the code after all.

Folau, who rose to prominence with the Melbourne Storm in 2007, last played league with the Broncos in 2010.

An RFL spokesperson told the website the organisation wasn't bound by any decisions from Rugby Australia or the ARL: "The RFL Board has ultimate discretion to refuse to register a player where it may bring the game into disrepute or he has been deregistered by any other governing body."

Folau has until 5pm on Wednesday (NZ time) to respond to RA's notice - either accepting the sanction or have the matter referred to a Code of Conduct hearing.