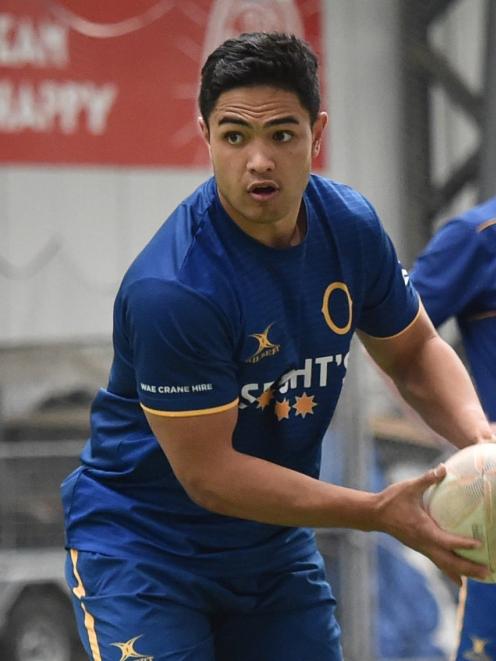 Josh Ioane. PHOTO: Gregor Richardson
Josh Ioane has played for the All Blacks and the Maori All Blacks.

So how is it that the Otago and Highlanders first five-eighth is lining up for the Moana Pasifika team against the Maori All Blacks in Hamilton next week?

Pacific Rugby Players chairman Hale T-Pole said to get Ioane, who is of Maori and Samoan heritage, had taken many conversations and plenty of negotiations.

"Josh has played for the All Blacks and the Maori All Blacks and I have been in touch with Josh over the last three weeks. It was going to be a big call for him but he wanted to play to recognise his Samoan side," T-Pole said.

"There was a lot of talk between the two parties and New Zealand Rugby fully supported Josh’s decision to come and play for us. It was a good win for us."

T-Pole said Highlanders coach and Maori All Blacks assistant coach Tony Brown had also made contact and was comfortable with the decision.

Ioane is the only All Black selected in the Moana Pasifika team although there are plenty of experienced Super Rugby players and provincial players in the side.

Moana Pasifika has been selected by NZR as its preferred group to enter an expanded Super Rugby competition in 2022.

The 12-team competition would include five New Zealand Super Rugby sides, five teams from Australia, a side from Fiji and Moana Pasifika.

T-Pole said there was plenty of work to get through to build a competitive side and the structure around it but the priority was to get through the game in Hamilton and then more work would get under way.

He would not be directly involved in the side but had an important role to play as the Pacific Rugby Players chairman.

He said no discussions or decisions had been made on getting players from within New Zealand and from current Super Rugby franchises.

But having a strong Pacific Island-based Super Rugby team would ultimately help the international prospects of Samoa, Tonga and Fiji.

"Whenever we try and get together for an international we have to bring people from all around the world.

"And sometimes it is too hard to get them back. We might end up getting three days to prepare for a game.

"But if they are playing in a competition like Super Rugby, where they are valued and playing to some top standards, then we should be able to lift standards and make us more competitive."

Samoa coach Seilala Mapusua had been keeping in touch with player selection for the Moana Pasifika team and looked at players who could come into equation for the Samoan team.

Experienced Super Rugby and provincial players such as Daniel Lienert-Brown, Vince Aso and Leni Apisai, who have all been named for next month’s match, were players who could become available for Pacific Island countries in the future.

T-Pole is in his last days of isolation in Auckland, having been overseas on work for the past three weeks. Provided he passed his last test, he was set to land in Dunedin today.