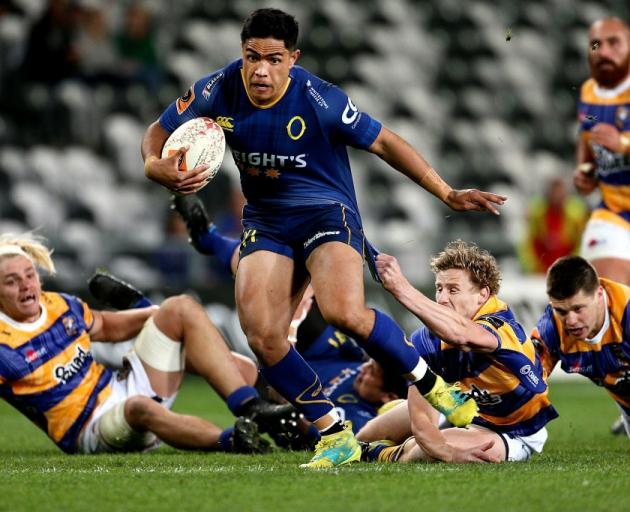 Josh Ioane makes a break for Otago against Bay of Plenty. Photo: Getty Images
Otago has made plenty of changes as it looks ahead but there is one intriguing selection in its side to take on Northland tomorrow.

The team is coming off a tough match against Canterbury and, with nothing to play for, has put in some fresh faces for the game against the Taniwha.

Players such as fullback Michael Collins, flanker Slade McDowall and lock Josh Dickson are all getting a spell while Jona Nareki and Aki Seiuli are on the bench.

Otago coach Ben Herring said some players were having a rest while it was also a chance to give players who had not played much an opportunity to get some minutes.

Josh Ioane has been picked at second five-eighth and will play outside Vilimoni Koroi.

Herring said that combination was one to look at and it had been forced somewhat after an injury to midfielder Sio Tomkinson.

Tomkinson suffered a blow to a knee and is touch and go whether he can play next week in the semifinals of the Mitre 10 Cup championship.

Harbour forwards Jeff Ikani and Saula Mau will make their first-class debuts if they get on the field from the bench. Rowan Gouws returns to halfback while Josh Timu and Taylor Haugh start in the outside backs.

Otago is going to finish third in the Championship as it can not catch the two sides above it - Hawke's Bay and Bay of Plenty - and is too far ahead of the fourth-placed team. So it will play an away semifinal.

Where and when it plays will be decided over the weekend. But if Hawke's Bay cannot beat Tasman today, it will play Otago, as the Magpies will finish second.

When the semifinal will be played next weekend will be decided after all games are concluded.

Otago does not want to play on Friday night, as it will not get back from Whangarei until late on Monday.