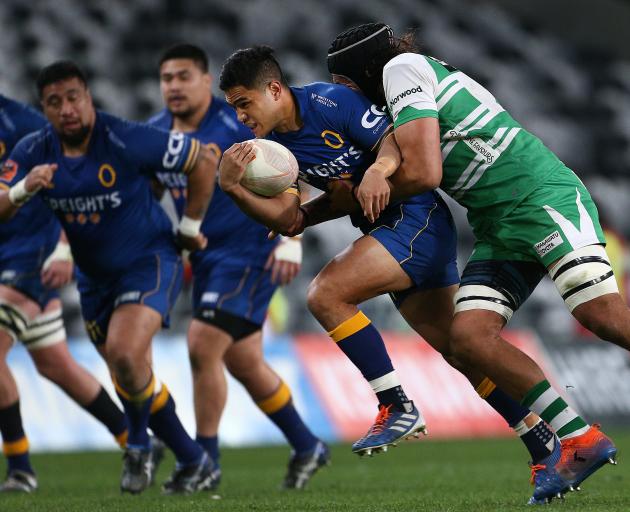 Otago’s Josh Ioane is tackled by Jackson Hemopo of Manawatu during their Ranfurly Shield clash at Forsyth Barr Stadium in Dunedin last night. It was also a round 4 game in the Mitre 10 Cup. PHOTO: GETTY IMAGES
Who said the Mitre 10 Cup lacked intensity?

In a real ding-dong, rugged battle at Forsyth Barr Stadium, Otago pulled away at the end to run out 37-20 winners over Manawatu.

The match was extremely physical, and neither team stood back.

Manawatu tried to hit back, but the game went Otago's way in the final minutes.

Josh Ioane put in a cross-kick and the bounce of the ball went up to winger Vilimoni Koroi. He flicked it up and the ball eventually landed in the hands of midfield back Sio Tomkinson to score.

With the sideline conversion from Josh Ioane, Otago had successfully defended the Ranfurly Shield for another week.

It was a brave effort from the home side as it had to withstand a big effort from Manawatu.

If Jackson Hemopo is not good enough to get into the All Blacks this week, then the national side will win the World Cup in a canter.

The big Highlanders and Manawatu lock was at his bruising and physical best for the Turbos last night.

He led a Manawatu front-eight effort which threw heaps at Otago, but the home side did not flinch.

It had more enterprise in the backs and in what was a see-saw second half, scored a vital try when Koroi completed his hat-trick with just under a quarter of the game left.

Koroi and his mate on the other wing, Joana Nareki, looked energetic and made metres when he got the ball. The Alhambra-Union duo were hard to contain and added the X-factor for Otago.

Up front for Otago, loose forwards Slade McDowall and Adam Thomson ran themselves into the ground, while hooker Sekonaia Pole worked hard all night.

In a hectic start to the match, there were three tries in the opening 10 minutes.

Otago was on the board after 85 seconds. Right winger Koroi intercepted a pass from Manawatu first five-eighth Otere Black and scampered 50m to score under the bar.

But Manawatu replied within five minutes as halfback Jamie Booth scored beside the posts after a period of pressure on the Otago tryline.

That was followed five minutes later by Manawatu winger Adam Boult scoring in the corner after Manawatu found the advantage line time and again through its forwards.

Otago came back into the game and scored just before the half hour mark through Nareki.

The winger made a nice run down the left and when lowered managed to wiggle out of it and keep going. He went round Black as the last line of defence and scored in the corner.

Ioane added a penalty which put his side 15-14 ahead with a few minutes left in the opening period.

Black answered with a penalty, but Otago had the final say of the first half. A nice inside ball from Ioane led to Koroi crossing untouched, though there was a hint of a shepherd in the build-up to the try.