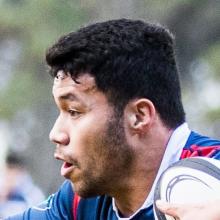 Ray Nu’u
Southland has made two changes to its side for the match against North Harbour in Invercargill tomorrow.

Halfback Raniera Takarangi injured his shoulder during the gutsy 17-14 loss to Bay of Plenty in Rotorua on Saturday night.

Takarangi looked sharp but his spot will be taken by Logan Crowley, while Liam Howley will come on to the bench as cover.

Midfielder Jaye Thompson also picked up an injury and has been replaced in the game day squad by Tevita Latu.

Regular starter Ray Nu’u has had a slow start to the campaign. The second five-eighth has been recovering from sickness but impressed against Bay of Plenty.

He will make his first start of the season and will form a potent pairing with Isaac Te Tamaki, who can be quite elusive.

Back-up hooker Sebastian Siataga is yet to be sighted which means 42-year-old Jason Rutledge will get another run from the bench.

Coach Dale MacLeod could not be reached for comment but he has continued with the policy of rotating players in and out of the pack.

Loosehead Ethan de Groot switches places with Joe Walsh and gets the start this week.

Hardworking lock Mike McKee moves from the bench back to the starting line-up in place of Ray Tatafu, and Charles Alaimalo gets the No6 jersey this week, with Glenn Preston starting the game from the pine.

Southland has made a strong start to its Mitre 10 campaign. It upset Hawke’s Bay 16-10 in the opening round and came close to tipping up a very talented Bay of Plenty team.

It took a late turnover from All Blacks captain Sam Cane to clinch the win for the Steamers.

North Harbour will be keen to open its account. It had a 43-29 loss to Canterbury at home in the opening round and a 41-19 loss to Waikato in Hamilton on Saturday.