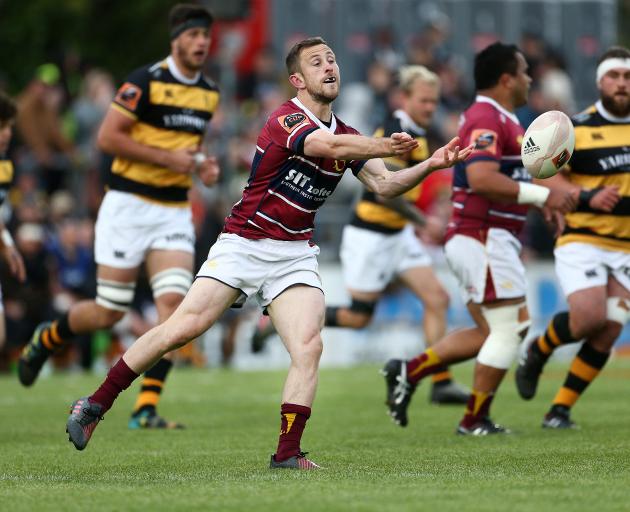 Scott Eade looks to spread the ball to the backs against Taranaki in Invercargill Saturday night. Photo: Getty Images
The last kick of the game rather summed up the whole match.

Southland replacement kicker Greg Dyer went for a penalty with time almost up on the clock. He rushed it and, although it started out all right, in the end it went wide and missed.

That was a reflection of the whole game between Southland and Taranaki in Invercargill on Saturday night.

Plenty of endeavour and effort. Many things that went close. But just too many inaccuracies, not enough patience and not a lot of points.

Taranaki was on a three-match losing streak while the home team was coming off a defeat to Northland in a game it should have won.

Neither side played to its potential.

There was plenty of dropped ball, combinations failed to click and neither side could get any momentum. The Southland forwards tried to get a flow into their game and battled hard but the errors came too often.

Taranaki skipper Lachlan Boshier stamped his class on the match.

Southland coach Dale MacLeod said it was a frustrating game to watch.

He could not knock the effort of the players but things did not quite click.

“We would get a lineout in their 22m and it would be a chance. But then we would knock it on or the combination was not quite there and we would lose the chance,” he said.

“It was one of those sort of games. The guys tried really hard. In the first half we were doing everything we could but just could not get the points.”

Fullback Josh Moorby injured his hand and there are fears he may have broken it which would be a big blow. Winger Penikolo Latu went off with an injured knee and is likely to miss a couple of weeks.

Much of the match was played in and around the halfway mark and there was few line breaks to speak of.

Taranaki opened the scoring after just 10 minutes with — what else — a lineout drive.

The amber and blacks rumbled the ball up to close to the line and prop Reuben O’Neill barged his way over. Scott Eade then knocked over three penalties to put his side ahead just after halftime.

But young Taranaki winger Jacob Ratumaitavaki-Kneepkens then showed some class near the hour mark, showing a nice chip and regather to the try. That extended the score to 17-9 and Southland never really got a sniff as the visiting team’s defence was too good.

Skipper Tony Lamborn tried hard for Southland as did most and Moorby had his moments.