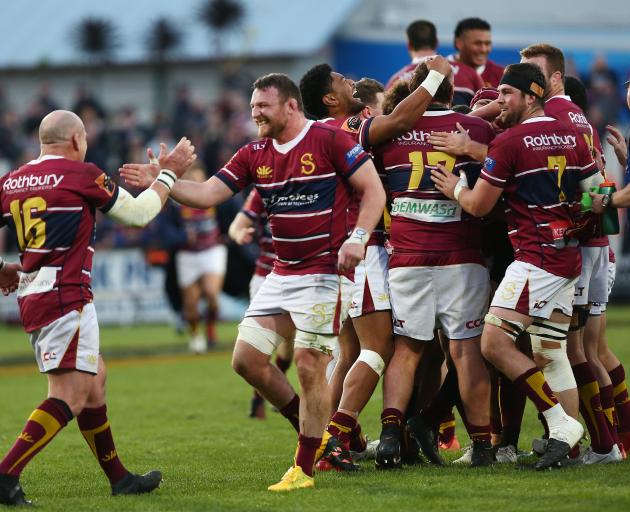 Southland players celebrate their hard-fought win over North Harbour in Invercargill Saturday. Photo: Getty Images
Sooner or later the seagull is going to get at least one of those hot chips you have been guarding so jealously.

And that about sums up the Southland Stags’ defence right now.

Back-up first five-eighth Greg Dyer nailed a penalty after the hooter to seal a dramatic 11-10 win against North Harbour in Invercargill on Saturday.

He received the opportunity because moments earlier skipper Tony Lamborn swooped off with the hot chip.

The hard-working No8 had made several other successful raids during the course of the game.

But with under a minute remaining, and his side trailing 10-8, he really needed to get his hands on the ball.

He claimed it popped up at his feet. However he nabbed it, seconds later fullback Josh Moorby was weaving his way around a couple of defenders and getting his side into a position to strike with the fulltime hooter sounding in the background.

North Harbour conceded a penalty and Southland grasped the opportunity to snatch victory away from the visiting side.

It is the first time Southland has won two games during a Mitre Cup season since 2016.

The highlight reel will be brief. Neither side was able to finish much at all.

The last pass missed the target an awful lot.

Stags coach Dale MacLeod picked up on that point.

‘‘We didn’t play too well to be fair,’’ he told the Otago Daily Times.

‘‘Don’t get me wrong — we are over the moon with the win. But we just left so much out there. I guarantee it wouldn’t have been a good game to watch on TV. There were a lot of mistakes from both sides.

Yes there were. But there was also some tenacious defence and Southland really attacked the breakdown.

The scavengers came away with a regular booty and it made a difference.

Lamborn led the effort in that department and Matt James had plenty of nuisance value as well.

Ray Nu’u lost a tooth in the opening 10 minutes but returned and had a decent game.

Moorby was elusive and lock Manaaki Selby-Rickit had a strong game.

For North Harbour, centre Asaeli Tikoirotuma made an early impact and fullback Shaun Stevenson was threatening.

The visiting side played 20 minutes with 14 players on the field. Prop Nic Mayhew picked up a yellow card towards the end of the half for collapsing a maul, while lock Gerard Cowley-Tuioti went to the naughty seat for offside play 12 minutes into the second spell.

Southland took advantage while Cowley-Tuioti was off. Winger Rory van Vugt scored in the corner.

There was a hint of a knock-on but the officials were happy with it.

Scott Eade got his side in front 8-7 with a penalty but North Harbour replied its own with five minutes remaining.

It had led 7-0 at halftime. Openside Tim Sail dived over in the 18th minute after his side had battered the line for nine phases.