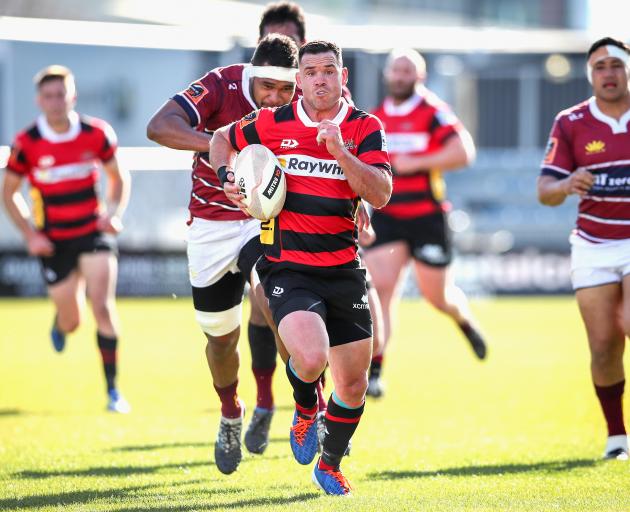 Ryan Crotty played just 40 minutes but managed to score twice in Canterbury's thumping win over Southland. Photo: Getty Images
Get your calculators out.

Canterbury demolished Southland in Christchurch on Saturday afternoon to post its first win in the Mitre 10 Cup this season.

All Black midfielder Ryan Crotty bagged a couple of tries and looked sharp.

Halfback Mitchell Drummond skipped his way through defenders to nab a brace, and Highlanders outside back Josh McKay grabbed two as well.

The score was a fair reflection of the gulf in class between
the two teams.

The only positive for the Stags was they were able to avoid breaking a dubious record. They were pumped 84-0 by Canterbury in 2012, so there have been worse days - just.

Fittingly, the game ended with a pushover try to Luke Whitelock.

"We didn't deserve to win by any stretch of the imagination," Stags coach Dave Hewett said.

"But I think we hit Canterbury at a really unlucky time. They were looking for a scalp and needed to win.

"They are a bloody good side and we have to respect them for that. But we didn't play well enough.

"We dropped the ball and made silly decisions and that has plagued us for the season."

Initially, there was some cause for optimism.

Southland fullback Josh Moorby made some incisive runs early. But while the visiting side was creating some opportunities, Canterbury was snaffling the ball at the breakdown.

Then the home side pounced. Southland blew a lineout in prime attacking territory.

Canterbury swung it quickly to former Highlanders winger Patrick Osborne, who carried the ball out of Canterbury's 22 with one hand before eventually off-loading to halfback Drummond. Flanker Tom Christie was on hand to finish the 90m try.

Moments later, Crotty swatted aside two tacklers and got the ball away to Drummond, who palmed off the last defender and scored another.

Canterbury crushed a bit more life out of Southland with a try to lock Luke Romano and two to Crotty before the break.

The support play was just tremendous and Southland badly needed to tighten up its defensive structures.

Canterbury needed only a couple of minutes in the second spell to stretch the margin. Impressive young first five-eighth Fergus Burke latched on the end of the chain from a set-piece move.

Drummond made a dart down the blind and stayed involved to add to the mounting score, and McKay brought up 50 points with a huge step off his left to beat the remaining defence.

Southland, meanwhile, stacked up handling errors. It was not a good display.