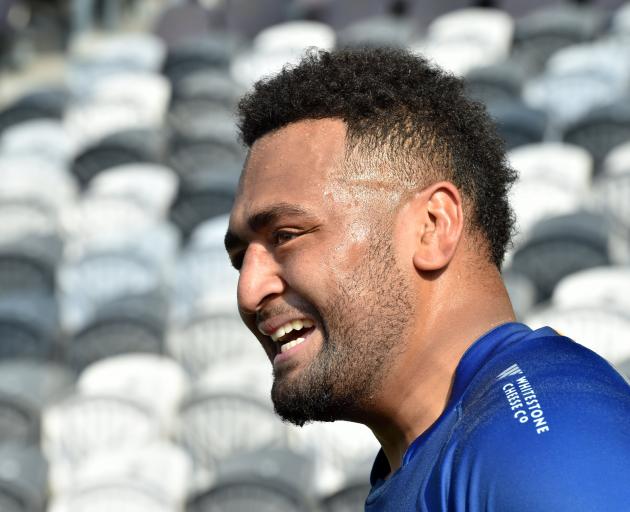 George Bower enjoys himself at Otago training at Forsyth Barr Stadium in Dunedin this week. PHOTO: PETER MCINTOSH
In some ways it has been a swift rise for George Bower.

But then again, he has waited around for a while.

Bower (27) will come off the bench tonight against Manawatu in a Ranfurly Shield defence at Forsyth Barr Stadium.

He never lost interest and kept working hard, becoming more focused as he got older.

Last year, he managed to force his way into the Otago side and made an impact off the bench as the side won the Ranfurly Shield and also made the Mitre 10 Cup championship final.

Then it was into the Crusaders for pre-season, which eventually led to a full season in Christchurch and Super Rugby glory.

It was a long way from being a bit player at Taita College in Wellington and then playing club rugby in Dunedin.

"But a couple of injuries and I managed to get an opportunity. Got to play some good minutes, get into the final and win the Ranfurly Shield which was pretty good.

"There were times when a bit of doubt crept in and I thought, `was it really worth it?' But now looking back it has really paid off."

"Just those one percenters. One percent here, one there. Like your extras after training, passing drills, those little reps."

Crusaders assistant coach Jason Ryan sounded him out about joining the Crusaders for training before Christmas with the All Blacks on leave.

"I did well in the pre-season. They said put on a bit of weight to stay in for the next pre-season and I did [manage] to put on a few clicks, which was good. I just [ground] away and managed to play the whole season."

"I was playing Otago Bs the year before and then playing a Super Rugby final and winning. Hard to believe really.

"I was at the back of the lineout, and I [looked] along the lineout and there are hundreds of caps worth of All Blacks there. Sometimes I have to pinch myself, but it is reality now.

" It just comes down to grinding away ... keep ticking away."

Bower is not sure where he will play next year, with the Highlanders on the lookout for a tighthead prop after the departure of Tyrel Lomax.

Bower came to Dunedin to study to be a teacher and has a year of study left. He taught himself to be a barber.

He also confirmed he is George Bower - not Giorgio.

"My first job in Wellington - my boss called me Giorgio. It caught on ... when I came down here I was called Giorgio and it sort of stayed that way. But I thought I better change it round, back to George, as it is my grandfather's name."