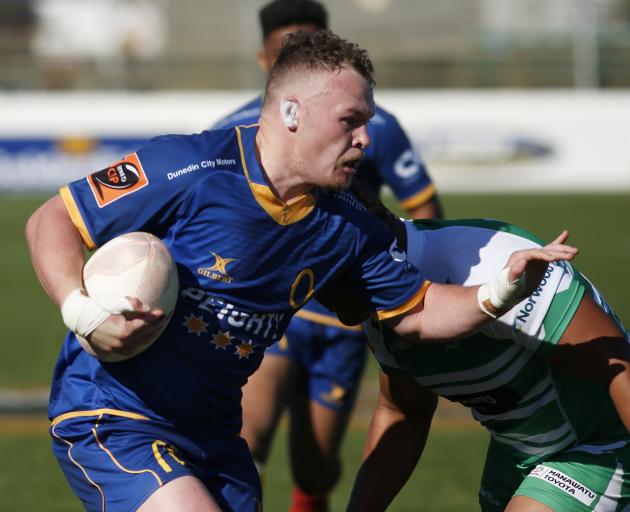 Otago's Slade McDowall is in line for a return to the team after missing 3 weeks for a high tackle. Photo: Getty Images
Otago will go into its match against Canterbury with history not on its side.

But form will play a part and the blue and golds will also welcome back a fair bit of artillery for the clash this Friday night.

Otago has not triumphed over Canterbury since 2005 when it beat the red and blacks at Carisbrook 24-19. Otago coach Tom Donnelly was locking the scrum that day, with James Ryan.

Since then, Otago has not beaten the Cantabrians in more than a dozen games.

Otago, though, should not put the white flag up yet.

Canterbury has lost four out of seven games this season and is sitting outside the playoff slots in the Premiership.

It was thumped 44-8 by Bay of Plenty in Tauranga on Saturday and is struggling to gets its attack going. Three of its losses have been by one point.

Otago has won five of its seven games so far in the Mitre 10 Cup and will go into the game with a degree of confidence.

It will welcome back into selection consideration Josh Ioane, Vilimoni Koroi, Slade McDowall and Sio Tomkinson.

Ioane and Koroi were stood down for the game against Northland for breaching team protocol. It is believed they went out last Sunday night after the victory over Counties-Manukau and turned up for Monday training not in ideal shape.

McDowall has finished a three-week ban for a high tackle in a loss to Hawke’s Bay while Tomkinson was handed a six-week ban in the first game of the season against Auckland after a high tackle which led with the shoulder.

McDowall should come back into the side but Tomkinson is unlikely to start as he has experienced a lengthy time off the field.

In other games over the weekend, Hawke’s Bay beat Manawatu 47-12 to retain the Ranfurly Shield and North Harbour pipped Auckland 23-22.