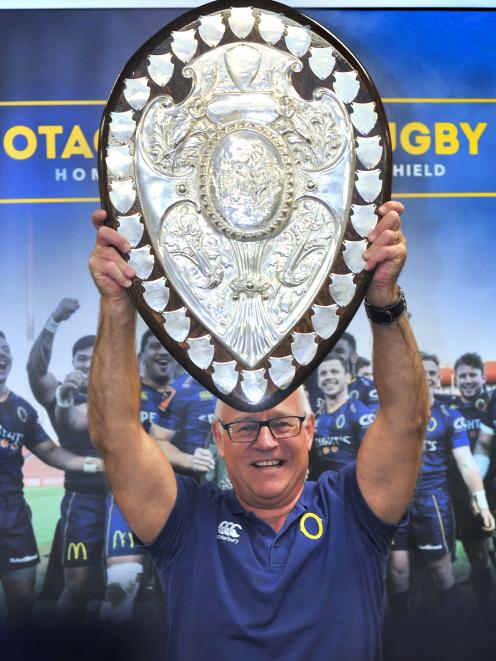 Otago Rugby Football Union community rugby manager Richard Perkins with the restored Ranfurly Shield. Photo: Christine O'Connor
The most valuable trophy in the land has had a clean, some spit and polish and been smartened up.

The Ranfurly Shield, won by Otago from Waikato in a challenge in October last year, has now got a bit of a shine and looks almost new - if something made of 150-year-old English oak could be classed as looking new.

Otago Rugby Football Union general manager Richard Kinley said the log o'wood was not like other rugby trophies in New Zealand, in that it was not put away for safe keeping nor did it sit its entire time in a trophy cabinet.

It was seen as a trophy for the people, so got more wear and tear on it, and that had led to New Zealand Rugby giving it a spruce-up. It was more than five years since the shield had last visited the repair shop.

A lot of dents on the plaques which appear on the side of the shield have been fixed and the wood has been worked on and varnished to give the trophy a better look. Some red stains on the wood have been removed and it was in a much better condition, Kinley said.

The trophy had been away for about six weeks in Waikanae being fixed over late November and into Christmas.

The trophy was presented to the New Zealand Rugby Football Union in 1901 by the governor of New Zealand, the fifth Earl of Ranfurly.

The national union decided to give the trophy to the best performed team in the 1902 season, which was Auckland.

The shield was designed as a trophy for football, not rugby and the centrepiece showed football but had been modified by adding higher goal posts on the football goals.