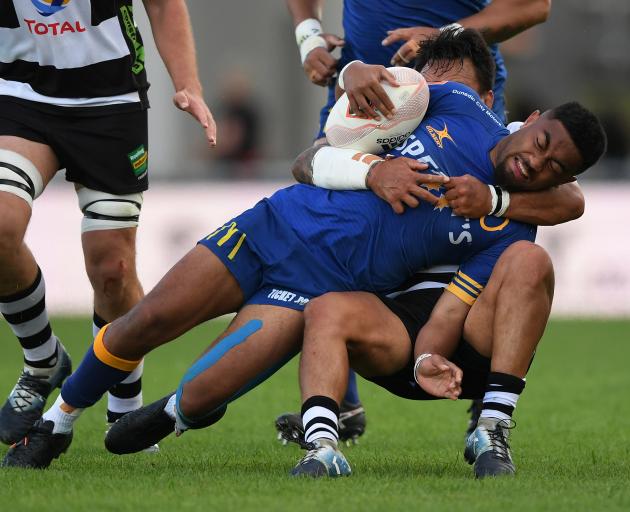 Otago's Vilimoni Koroi is hauled to the ground during the Mitre 10 Cup Championship semifinal against Hawke's Bay at McLean Park on Saturday. PHOTO: GETTY IMAGES
Otago coach Ben Herring says there was not total despondence after his side's dramatic loss to Hawke's Bay in Napier on Saturday.

After a pulsating 100 minutes of action, Hawke's Bay came away the winner, 44-39, in the Mitre 10 Cup championship semifinal.

The game had absolutely everything after it had been tied up at 31-31 at the end of 80 minutes.

Otago scored early in the 20 minutes of extra time through a penalty but Hawke's Bay then cleared out to 41-34.

But with replacement No8 Mika Mafi scoring a try with a few minutes to go, Otago was right back in the game. Josh Ioane then pushed the conversion wide, kicking the ball into a swirling wind.

Hawke's Bay went down the other end and kicked a penalty. Otago got the ball back with time up but Ioane kicked the ball across the field for someone to chase on to. No-one did and the game was over.

Herring said the match was a thriller and he could not fault his players.

"I'm super proud of the fellas- just the intensity the guys showed out there, the way they started and just kept going for the whole 100 minutes. As a coach I could not have asked for more.

"Everyone got game time and everyone felt like they contributed. We said after the game that if the season had to finish today then this is the way we would have wanted it to finish. The guys were awesome."

The players knew they had given everything and there were some tired bodies after the game.

Herring said he was confident the team could put on a good performance and that was just the case. The side nullified much of the Bay game, based around the maul and lineout, and never stood back.

Herring said he was not sure what happened at the end with Ioane's cross-kick but it was obviously a miscommunication.

Ioane, though, had a top game and was one of the many Otago backs who found plenty of space.

Otago led 24-14 at halftime but in the second half it was pushing into a wind which swirled at times.

Centre Aleki Morris-Lome scored a crucial try in the second half to get Otago back into the contest after Hawke's Bay had scored twice to go ahead.

Herring said the coaching staff realised with about 20 minutes left the match could go to extra time so worked its bench accordingly, which he said was a bonus with fresh legs coming on in the extra time.

It is hard to see how Hawke's Bay is going to front against Bay of Plenty in the final on Friday night.

In the premiership semifinals, Tasman beat Auckland 18-9 while Wellington beat Canterbury 30-19. Tasman will host the final on Saturday night.