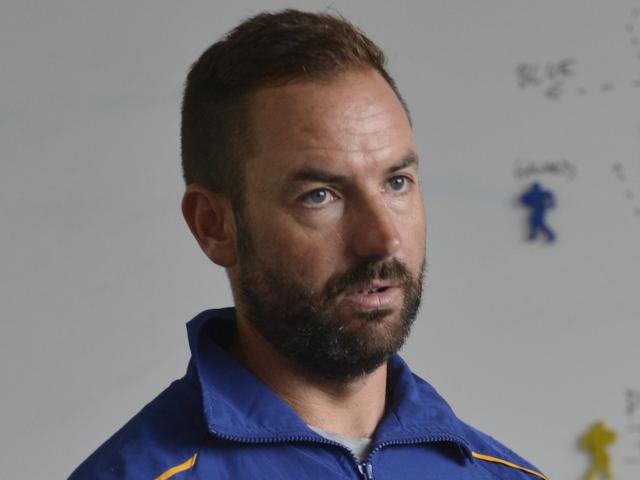 Ryan Martin
Otago has lost the Ranfurly Shield but is still using its experience with the log o' wood for the crunch part of the season.

After the long flight back from Whangarei on Monday, the side had a light run yesterday as it starts preparations for the semifinal against Hawke's Bay on Saturday.

Otago assistant coach Ryan Martin said as the side entered playoff territory the team would have to increase its intensity.

''Every single shield match, including the games against Thames Valley and North Otago, had a test match-like intensity to them,'' he said.

''We feel that is the best preparation possible for us for these playoff games.

''These games will come down to big moments within the games. Having really good game management and playing an attacking style.

Martin said as the attack coach he was happy with how the side was going when it had the ball.

''We are in the top five for metres gained right across the whole competition so you have to be happy with that. It is no huge secret who the people are that we want to carry the ball in our team.

''There has been some good work and clever work to get the ball in the hands of those players.''

Backs Vilimoni Koroi and Jona Nareki have been electric for Otago and have linked well with the players around them. They are bound to be key players for Otago on Saturday.

Martin said the side had put the disappointing 40-12 loss to Northland behind it and the game did give other players a real chance. Martin said the result showed any team which was 5% off its best would finish well off the pace.

Hawke's Bay based much of its game around the lineout and the rolling maul. That was no secret, Martin said, and Otago was looking at various ways to combat it.

Defending it in different ways was the best approach for Otago.

The side had a clean bill of health and would up the intensity in training during the week.

He said Herring, who was leaving at the end of the season, was very innovative and had showed him it was not just about the game. He had a real ability to look at the big picture.

''For him it is not about being a rugby head. It's about working with people and trying to bring out the best in the individual.''

Martin is not sure where his future lies. He has been coaching fulltime since January, first with the Asian Pacific Dragons in Singapore and then with Otago so the first thing was to have a break at the end of the season.

It was still unclear what was happening with the Dragons. He would be keen to get involved with Otago next season with new coach Tom Donnelly.