Relieved ordeal in hospital over 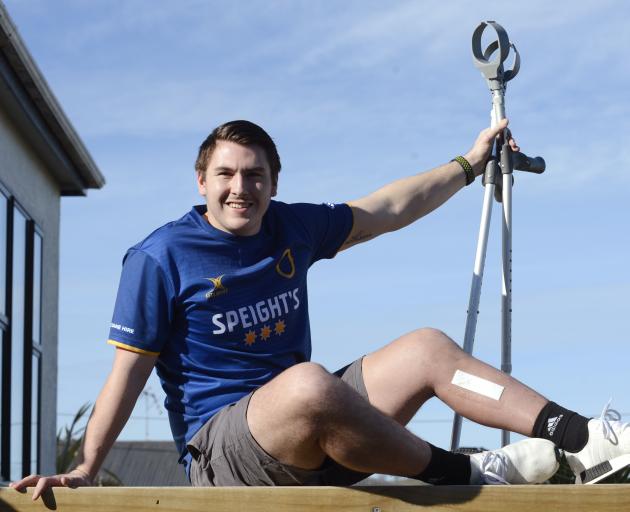 Otago hooker Ricky Jackson is over the worst and is looking forward to getting back to full fitness. Photo: Gerard O'Brien
It was not the 21st birthday celebration Ricky Jackson had been hoping for.

Jackson, a promising hooker, who played for the New Zealand under-20 side last year and made an appearance for the Highlanders this season, has just spent more than a month in Dunedin Hospital after a bang on his knee blew up.

Jackson underwent five operations, spent days in pain and watched his body go through the mill.

He is back at home now but it was a journey he found ''physically, mentally and emotionally tough''.

It all started in the club semifinal on July 20, when playing for University he took a bang to his left knee. 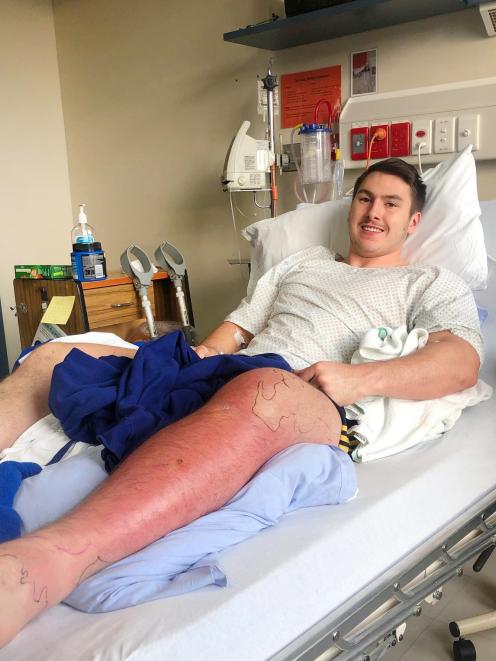 Ricky Jackson in Dunedin Hospital with his wounded knee. Photo: Supplied
''It hurt a bit but I still played the game. It was sore and then slowly it started to spread. By the following Wednesday I was in excruciating pain. I was spewing and feeling really bad,'' he said.

''I was taking painkillers but they were not working.''

He was admitted to hospital that day - four days after the injury - but the initial antibiotics he was given in hospital did not do much good.

''It could not shake it. It spread all the way up to my groin and down to my foot. Then I had an MRI and surgery was needed.''

Suffering from cellulitis, he had to wait until August 5 before he had an operation during which the surgeons drained pus and infection out of his left leg.

The following day it was cleaned out again and a third operation to clean out the leg took place on August 8.

''The pain was just getting worse. For two and a-half weeks I was bedridden. Too painful to walk, in excruciating pain.''

Just under a week later on August 14, Jackson was ready to head home. He signed his discharge papers and was set to farewell the hospital.

''But they had a look and there was a lot of blood coming out of the wound. They said 'you are not getting out today'.''

It was decided to put a sponge into his leg along with a vacuum system to help drain the infection out of his leg.

''They would change the sponge every three days, wash it out and put in a new sponge.''

More surgeries were needed to reduce the swelling in his leg and remove more of the infection as the sponge was drained.

Jackson, a commerce student, just had to sit back and endure them. But finally after 31 nights in hospital he went home last weekend.

He was worse for wear but just glad to be home.

He turned 21 in hospital but any celebration was postponed.

''There were times there when I thought I would never get out of there. I thought maybe three to five days in hospital, not 31. I had three days in my own room and the rest of the time out with three other guys in a room. That sort of stuff really helps, with a whole lot of different people.