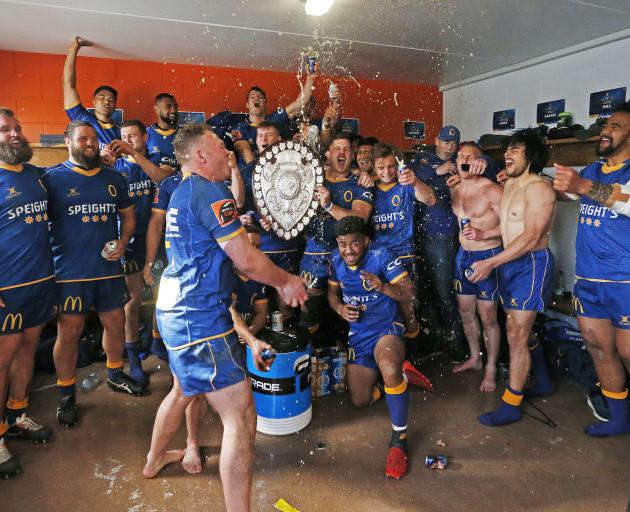 Otago players celebrate in the dressing room with the Ranfurly Shield after winning it by beating Taranaki 30-19 at TET Stadium & Events Centre in Inglewood yesterday. Photos: Getty Images
It took 56 years to break the long Ranfurly Shield drought. Now Otago has won it three times in seven years. 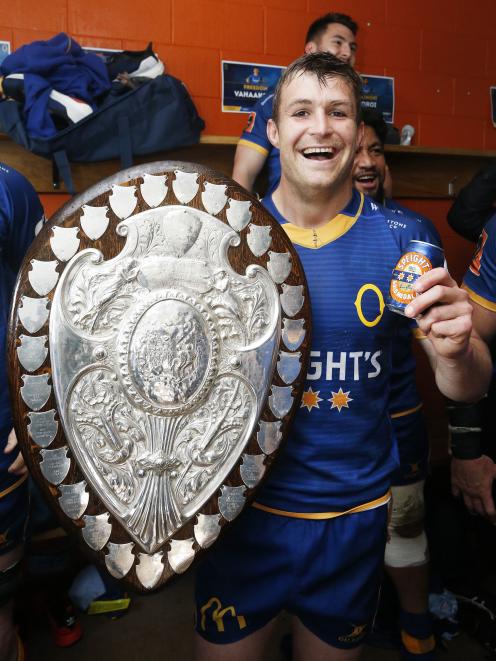 Captain Michael Collins has played in all three of Otago’s recent successful challenges.
Otago made a successful visit to Inglewood yesterday as the men in blue and gold beat shield-holder Taranaki 30-19.

It was a total team performance from Otago, which led 22-5 at the break and then successfully withstood the expected Taranaki fightback.

Taranaki had won the log o' wood only last weekend but fell at its first defence.

The win was based on a super forward effort from Otago and a tight defence which never gave the Taranaki team any room to move.

It has set up a big battle next Sunday at Forsyth Barr Stadium where Otago will face Hawke’s Bay in its first defence.

The match will kick off at 4.35pm. It is also a double-header, with the Otago Spirit women’s side playing earlier in the afternoon against Manawatu in a crunch game.

Otago Rugby Football Union general manager Richard Kinley said it would be a big double-header for the union.

"It would be cool to get everyone along to the game. We know the teams talk about what a lift they get when there is a big crowd there," he said.

"It seems pretty incredible that we could not win the shield for 56 years and now we have won it three times."

Kinley was proud of the performance put in by the Otago side and the hard work done by the coaching team. Tickets for the double-header on Sunday are already on sale.

When Otago won the shield in 2013 after the long barren run, its first defence was against Hawke’s Bay. The visitors won 20-19 in what was a pulsating match in front of a crowd of more than 17,000.

Otago then won the shield in 2018 from Waikato and held it for most of last season before losing to Canterbury in the last challenge of the season.

Captain Michael Collins is the only Otago player who has taken part in all three successful challenges of the past few years.

The win yesterday capped off a good couple of days for Otago hooker Liam Coltman.

He has been called into the All Blacks training camp in Hamilton this week. Dane Coles is believed to be carrying an injury.

Coltman, who had an excellent game yesterday, should still be available to play for Otago next Sunday.

The side, with the shield, is set to arrive back at Dunedin Airport at 10.30am today.