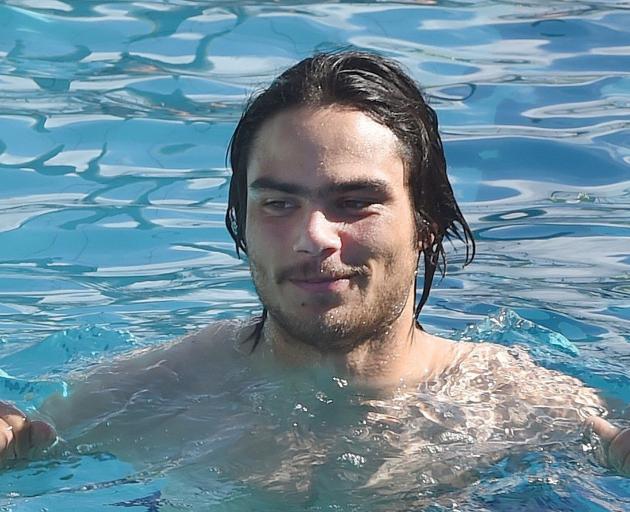 Otago centre Josh Timu at the St Clair Hot Salt Water Pool in Dunedin earlier this week. PHOTO: GREGOR RICHARDSON
Like any player, getting out on the paddock is what Josh Timu is after.

Sitting rather than playing had been Timu’s lot over the past three years but he is now finally injury free and getting some regular playing time.

Timu (23) had broken a couple of thumbs and a troublesome ankle meant he struggled to put himself in the picture for the blue and golds.

The son of All Black John Timu, he made his debut for Otago in the 2017 season. But in the following seasons he amassed only seven other appearances as his body let him down.

The Mitre 10 Cup is a quick and short season. Any stretched ligament or broken bone throws the whole season up in the air. So breaking a thumb in 2018 did Timu no favours and he had a niggling ankle injury right through the 2019 season.

In the end, he opted for an operation and a long rehabilitation.

"I had the surgery in November, right after the season finished, just to fix up a few things, a few ligaments where they were not supposed to be," Timu said.

"It was a long rehabilitation but then Covid came along and I didn’t train a lot. But then no-one else did either. So in the end I did not lose a whole lot of rugby. It was a good chance to get the body right."

Timu went back to his parents’ house in Wanaka and concentrated on getting his body right for the season.

A good few months down the track and he played the odd game for University and was then ready for Otago.

Like any player pushing for selection, he needed a way into getting a start. With Sio Tomkinson banned because of a high tackle and then Aleki Morris-Lome with an ankle injury, the path cleared for Timu.

He has looked good in the past few games and scored two tries against Counties-Manukau last Sunday.

"They were lucky, really. Just in the right place at the right time."

Timu, who is in the late stages of getting a commerce degree in accounting and finance, was lucky enough to be part of the Sunwolves last season, working with Tony and Cory Brown.

"I just got a call from [Sunwolves assistant coach] Cory Brown, who asked if I wanted to come up and help them out ... it is easy to say yes to that. It is Super Rugby so you are playing the very best players and it was a big challenge."

His dad, who played 101 games for Otago and 26 tests, did not give him any pointers about his play and simply encouraged him to do his best.