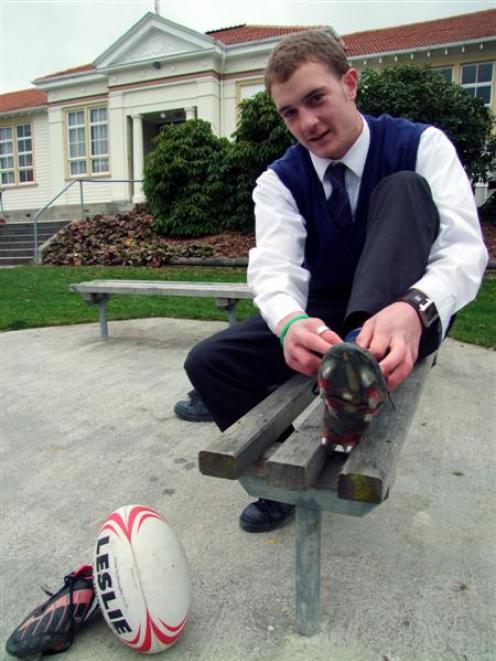 Rising South Otago High School rugby player Matt Faddes hopes to cap off a stellar 2009 season by being named in the New Zealand secondary schools team next month. Photo by Glenn Conway.
Matt Faddes has made almost every post a winner this season and the classy outside back from Balclutha still has a few items on his checklist before the 2009 season ends.

The 17-year-old year 13 South Otago High School pupil has enjoyed one of the most fruitful seasons of his playing career, being selected for the Otago Country premiers squad.

He is also preparing for his biggest challenge yet.

The flying centre has been picked in the wider squad to be considered for the New Zealand secondary schools squad.

That group will be analysed over the coming month and the final cut will be made on September 7.

Faddes hopes his strong form in 2009 continues and he can make the final team that will make a brief tour of Australia later this year.

His selection in that side will put his name more prominently before provincial and national selectors.

For his part, Faddes is happy being a member of the successful SOHS first XV which has been a dominant force in this year's new Highlanders competition involving Otago and Southland secondary schools.

As one of the team's leaders - this is his fourth year in the First XV - Faddes has used his experience to help guide some of the younger team members.

That mixture of youth and experience has proved a winning combination for the side and, indirectly, raised Faddes in the estimation of Otago and national talent scouts.

Faddes has crossed the line 16 times this winter for a total of 80 points through tries, while he has also landed three conversions - although he is not the regular team kicker.

Next year, he hopes to study physical education at the University of Otago and continue playing his rugby in the city.