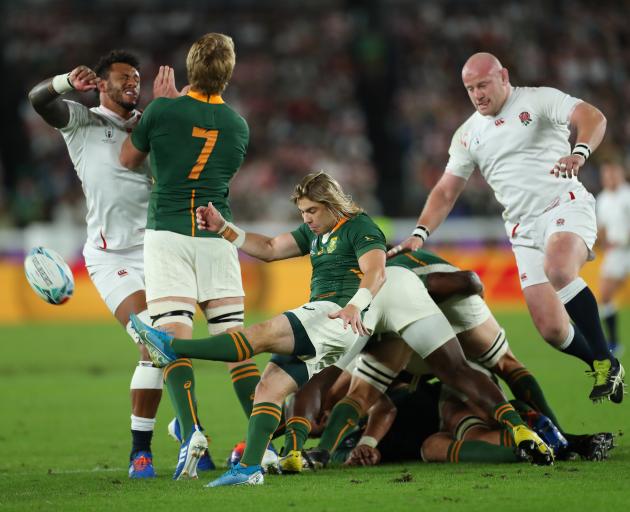 South Africa's Faf de Klerk kicks from the ruck - again. Photo: Getty Images
Most times when a great game is played, the cliche of "someone has to lose" gets wheeled out.

For the World Cup final it was a case of "someone had to win."

Sure, it was exciting - but that was because of the occasion, not the performance - and there was the very brief display of skill - come on down Cheslin Kolbe.

But really, as far as entertainment goes, this was on par with Ishtar - a 1980s movie, which flopped badly and was said to be "shockingly dull".

This final was not far behind that. Kolbe's piece of brilliance to score the final try was one highlight but there were plenty of lowlights

Most finals in big sporting events are like this these days. The rewards are so great that the approach to take at the big dance is one of no risk. There is simply too much at stake. Coaches become more conservative than Margaret Thatcher.

Italy won the World Cup in 2006 in Germany in a terrible match. Spain managed to get up over the Dutch in 2010 in a forgettable encounter.

The 2011 Rugby World Cup final. Yes, it was a tremendous occasion and a gutsy New Zealand win but it was a woeful match.

In Yokohama, on Saturday night it was a return to normal service.

Both coaches admitted before the game it was going to be tight and duly played for that.

It was all about territory and penalties - kicking the ball away to put pressure on the other team; no long passes for fear of being intercepted or a player getting isolated.

How does one change that approach? Is there a chance of teams having a go and throwing the ball around?

Unlikely. Coaches decide tactics and when there is a lot on the line, most coaches err on the side of caution. They go back to the safe and low-risk moves which may not get a lot in return but do not give the opposition much to work with.

The rules, or the way they are interpreted, help this approach.

Who made the scrum - which is not a joy to watch - such an essential part of the game and a deliverer of so many penalties? Why now can halfbacks ruck the ball back from a breakdown and then wait an eternity to wheel out 30 box kicks a game, turning the game into a standstill? Is there any judging of the offside line at all? What happened to staying on your feet at the breakdown? How ridiculously long can an advantage go for?

The tournament in Japan has had its ups and downs. That was expected. There were some great games and some poor games. Some sides got better. Other peaked too early.

In the end, did the best team win? Perhaps, but few were still awake to watch it win it all.

Seriously disagree - you don't need to have 9 tries a piece to make it entertaining. That was an impressive display from South Africa.
In the end, if NZ had lost due to wanting to play it fast and loose, we'd just lambast them for losing. If they win but win ugly, they didn't win well enough.

I see some Kiwis hold other teams to the same impossible standards - let South Africa enjoy it, they deserved to be there and won on the day.

It's a very lightweight point of view that believes the quality of a rugby match is determined by the number of flashy plays and tries scored.

Best rugby final I've ever watched and what a fantastic display from South Africa.. true grit

Totally disagree. What match were you watching?
Final tournament games are traditionally tight affairs. This was a beauty. Confrontational and strategic. For me this was the ultimate in contests.
Perhaps you are disappointed that the AB’s so underestimated the threat of England, that there’s no such thing as dual playmakers and insisting on playing three brothers didn’t deliver the result you wanted.

WAW .... great scrums..great line outs, great kicking - both points and position..stunning running, big hits ... hell mate ... you lost . give credit where its due.
as for chucking the ball around and spectacular tries etc. ... win first !