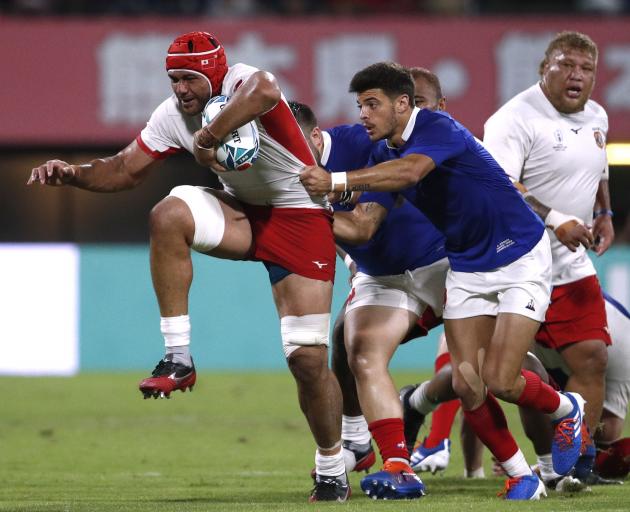 Tonga's Sione Kalamafoni in action. Photo: Reuters
France withstood a furious Tonga fightback to grind into the quarter-finals of the Rugby World Cup on Sunday with a nerve-jangling 23-21 win that only just banished the ghosts of their shock loss to the Pacific islanders at the 2011 tournament.

The thrilling victory at balmy Kumamoto Stadium sent Tonga crashing out of the tournament with three successive defeats, while also sending Pool C rivals Argentina and the United States packing.

In a clash of unrelenting drama, flanker Zane Kapeli collected a cross-kick for a last-gasp try and Latiume Fosita's conversion put the Tongans within two points with just under a minute left.

But France winger Damian Penaud, caught out of position for Tonga's last try, soared high to tap back the re-start kick, giving France crucial possession to hold on to victory.

Tonga, whose 19-14 win over Les Bleus in New Zealand eight years ago remains a fairytale chapter in World Cup folklore, battled hard right to the finish and for a while it seemed there could be a repeat of the wonder in Wellington.

But flyhalf Romain Ntamack played a decisive role, steering two penalties between the posts to give the French a cushion that proved just sufficient.

Before that, it was the flair and enterprise of Virimi Vakatawa and Alivereti Raka whose first-half tries gave France a quick start.

Having cemented second place in the pool behind England, three-times finalists France will now head to Yokohama seeking victory in "Le Crunch" over Eddie Jones's men for a kinder route through the knockout rounds.

While France had laboured to a 33-9 win over the United States in their last start on Wednesday, they were switched on from the first whistle.

Bolting to a 10-0 lead after six minutes, Raka burst away from a botched Tongan lineout before off-loading to centre Vakatawa for France's first try.

A missed penalty kick by Ntamack some 10 minutes later preceded an almost inevitable French lull, with handling errors and passes floating forward and wide to thwart a string of promising attacking moves.

Their defence remained solid, though, and France raised the pressure before scrumhalf Baptiste Serin caught Tonga napping with a quick-tap penalty, whipping the ball wide to a charging Raka who kicked a grubber past the last defender and collected it on the try-line.

With the game slipping away, Tonga needed to respond and did so through forward muscle.

Snatching the ball out of a ruck and leaping for the line, scrumhalf Sonatane Takulua was rewarded with a try after a lengthy TMO review to give Tonga a huge boost on the cusp of halftime.

The match turned on its head shortly after the break, with a thrilling try to France flanker Charles Ollivon ruled out by the TMO due to a forward pass.

In a trice, Tonga won a turnover with a bone-jarring tackle in midfield and winger Cooper Vuna hoofed the balldown field.

The bounce popped up obligingly into the arms of gleeful centre Malietoa Hingano who barged over the line.

With the ghosts of 2011 stirring, France redoubled their intensity at the breakdown and the pressure told as Tonga's discipline began to wane.

Ntamack knocked over a pair of penalties to give his team breathing space and the match appeared settled when winger Damien Penaud cantered over in the 68th minute.

But again, the try was cancelled to leave French fans howling, with a knock-on by fullback Maxime Medard spotted by the TMO.